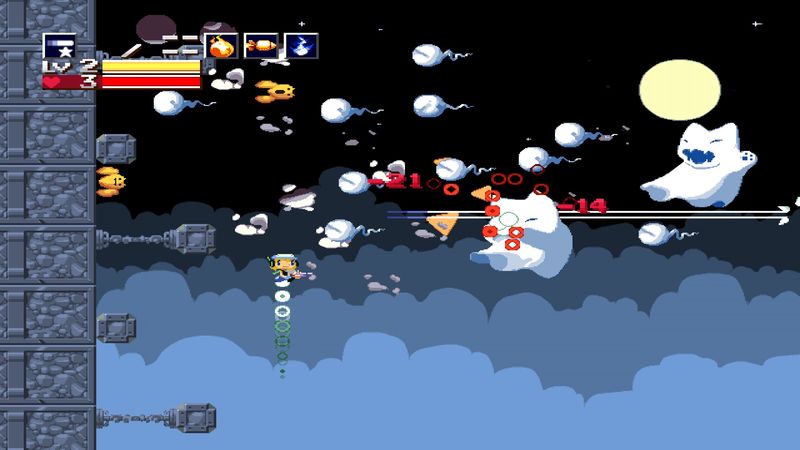 Unlock a full arsenal in Cave Story+ with all the weapon locations, including the Super Missile Launcher, the Machine Gun, and more.

Weapons aren't just useful tools to destroy enemies in Cave Story+, some of them can help you access areas you couldn't normally reach. Some have to be traded, giving up your basic pistol to get the Snake, the Spur or the Machine Gun. Then there's the powerful Missile Launcher and it's upgraded Super Missile Launcher form.

Many of these weapons are hard to miss, but a few are totally secret. Check out where (and how) to get every single optional weapon with the locations below.

There are 10 unique weapons available in Cave Story+. Find them all with the following locations. Some weapons can be upgraded / enhanced as you progress -- increased ammo, more damage, etc.

The starting weapon of Cave Story+ is found in the Hermit Gunsmith's Abode in the First Cave.

The powerful Missile Launcher is located in the Egg Corridor - Egg Observation Room. It dishes out explosive damage, but has limited ammo (10 Rockets standard). Enemies will drop rockets randomly when defeated.

Like the Polar Star, is can be enhanced with 20XP. The blast radius and long range makes it ideal for destroying groups of enemies, and it remains useful for the entire game.

The fireball works just like the fire flower from Super Mario Bros -- when thrown, the fireball bounces down (or up) slopes. Find it in Santa's House in the Bushlands.

Ammo is unlimited, and collecting XP changes the number of fireballs thrown.

Weapon located in the Mimiga Village - Assembly Hall fireplace. Very weak, and is limited to 100 ammo that automatically regenerates over time.

The Bubbline is useless at Level 1, but when enhanced to Level 3, you'll gain the Bubble Shield ability. Hold down the fire button to make bubbles float near you.

The fast-fired machine gun is located in the Sand Zone Residence. Like the Bubbline, it has 100 shots that regenerate automatically.

WARNING: You'll have to trade the Polar Star to get the Machine Gun. This locks out the Snake and the Spur weapon.

The Machine Gun can be enhanced with the Turbocharger, letting you fire even more. It's available from Chaba's Shop.

At Level 3, shooting down with the Machine Gun allows you to fly indefinitely... as long as you don't get hit!

A slick sword, it's located in the Sand Zone - Warehouse. Instead of using it like a melee weapon, it's a short range projectile. You throw the sword and it returns to you.

Note: Mister Little, a man found in the Mimiga Village Cemetery, exchanges the Blade for the Nemesis, or the Nemesis for the Blade. Return him to his house to trade weapons.

Each Level of the sword has a different effect and benefit. The Level 3 Blade deals massive damage. Bosses can be easily cut down to size with the Level 2 Blade.

A special weapon that shoots through walls, it's only available from Chaba's Shop in the Labyrinth. It has unlimited ammo, and shoots fireball-like projectiles that pass through walls.

WARNING: You'll have to trade the Polar Star to get the Snake. This locks out the Machine Gun and the Spur weapon.

As a standard weapon, it's about 2-4x more powerful than the Polar Star. Each shot moves in a shallow snake-like pattern.

This upgraded Missile Launcher is hidden in the Labyrinth - Boulder Chamber. It's a straight improvement -- it works just like the regular missile launcher, with limited ammo but plenty of damage.

This is the strongest weapon in Cave Story+.

To get the Spur, return to the First Cave - Hermit Gunsmith's Abode later in the story and exchange the Polar Star.

WARNING: You'll have to trade the Polar Star to get the Spur. This locks out the Snake and the Machine Gun weapon.

Like the Polar Star, this is a simple pistol with unlimited ammo. It starts firing Level 3 Polar Star pellets and goes up from there.

Holding down the fire button enhances the Spur. XP is useless and won't upgrade the Spur -- at MAX Level, the Spur fires a wide, sustained laser beam that kills most enemies in one hit.

The powerful Nemesis is acquired from the Outer Wall - Little House. It starts off strong, but collecting XP actually makes the Nemesis weaker.

Note: Mister Little, a man found in the Mimiga Village Cemetery, exchanges the Blade for the Nemesis, or the Nemesis for the Blade. Return him to his house to trade weapons.

At Level 1, the weapon is at its deadliest. If you gain XP, hurt yourself to revert to a lower Level. Level 3 is practically worthless.

That's all the weapons in Cave Story+! Check out the links about to learn how to get the Best Ending, find all the Life Capsules, or locate all the key items.
Related to:
kevin thielenhauscave storyguidenintendo switchpcplatformingvideo gameswalkthrough
0
Tweet