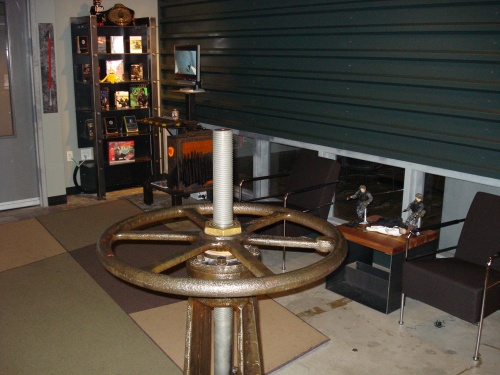 One of the things I've always wondered about in Valve games is the credits, in that very little seems to get credited, if you catch my drift. The names of all the people involved always simply roll past in alphabetical order with no job titles or details of any kind. The reason for this, as I'm learning, is that no one at Valve has any specific title. Part of that is because of something called the Cabal System. When a job needs done or a problem needs solving, or an issue has come up in one of the hundreds of play test sessions Valve games undergo, a group of bods with random assortments of skills from all over the spectrum of game design are brought together to bounce solutions off each other and argue their merit. Anyone can propose a change as long as he gives a good reason as to why it would work. No one has a title because no one has any clearly defined role.

I witnessed the Cabal System in action today when a roomful of rowdy animators asked me to take a look at the prototype for the newest "Meet the Team" Team Fortress short, about which I've probably already said too much. After I was forced to admit that I had completely misunderstood the entire thing because I'm kind of thick, the team spent the next three or four hours loudly arguing possible ways that props and character movements could be subtly changed to make it easier for thickies like myself to "get." Watching it all unfold makes it easier to understand why there's always such a long wait time between the releases of Valve games and products, but I guess history has proved that this makes for a higher-quality output than the more conventional routine of whipping the code monkeys with leather straps to make a strict publishing deadline. 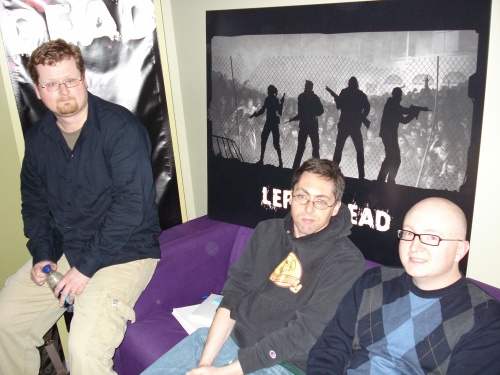 The highlight of the evening was a demonstration of Left 4 Dead twinned with a sort of game writers' pizza party. There was me, Wolpaw, Faliszek, Jerry Holkins (Tycho) from Penny Arcade, Jay Pinkerton of Cracked magazine and latterly Surreal Software, and a bunch of dudes from Nintendo, some of whom apparently worked on the localization of Super Paper Mario and had seen my review of same. We saw eye to eye once they stopped pushing my head down the toilet.

Left 4 Dead - leaving aside the horrible practice of replacing words with numbers - is a co-op multiplayer game in which four players form a rag-tag group of desperate survivors in the midst of a ruined post-apocalyptic world where a bunch of high-speed marathon runners have somehow acquired a lust for human flesh. Together the last four humans must make their way inch-by-inch to an extraction point while fending off nightmare monsters and making the occasional traumatic decision between running back to fetch a fallen comrade or accepting that whatever shredded remains that could be salvaged from the hordes probably wouldn't be much use in future gunfights.

That's what went on in the main room, at least. In the next room, other computers were set up to control the special zombies. This was a much jollier experience in which cheerful mutants waited giggling behind corners for the survivors to show up before jumping out and blinding them with jets of projectile vomit. It seems that Left 4 Dead will be a most satisfying experience for people who want a tense, cinematic journey through a terrifying hell on Earth and equally for people who want to run up behind said people and go "Boo."