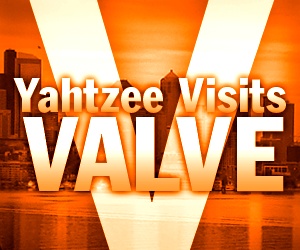 About a week ago, Yahtzee got on a plane to visit Valve. Seems they were so tickled by his review of The Orange Box, they wanted to meet him in person and shake his hand. Either that or shoot him and dump him in Puget Sound. The suspense was palpable. But even if they did whack him, he'd at least get to visit the US, which, as we all know, was a lifelong dream of his.

The only problem was he wouldn't have time to prepare a Zero Punctuation review for this week. Instead, he wrote a travelogue of his experiences in Seattle, including visiting a shooting range, firing handguns with the people from Valve. Yeah, it doesn't get any better than that.

So here it is, Yahtzee's Travelogue. Several days ago, he boarded a plane in Australia, headed for the United States, and returned only a few hours ago. Along the way he lost some luggage, a little innocence and gained a whole new perspective on life, and what it means to be an American. Maybe. Enjoy! 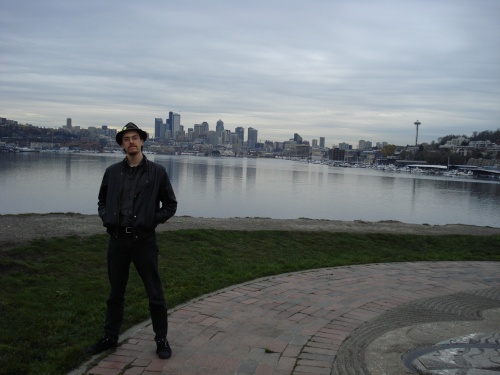 Realized on the train that I left my wash bag at home. Well, fuck. Things are certainly off to a flying start. Had to buy a toothbrush, toothpaste and razors at an airport shop. Came to $25. Twenty-five bucks! What, do they dispense cocaine cut with gold dust or something? Thank Christ I'll be in America soon, where people treat each other right.

Amazingly I've been in LA for two hours, and I still haven't been stabbed. The airport system seems to have swallowed my biro, though. Don't ask me how, but it went through the scanning machine with all my other personal effects, then disappeared off the face of the Earth. Am writing this with a new pen I bought at a gift shop. It has "HOLLYWOOD" written down the side and is about a half-centimeter thicker than I like.

On the last flight they gave me a free toothbrush. Feel a bit stupid.