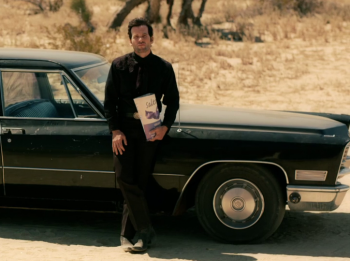 Go behind the scenes of The Liars Chair in our interview with filmmakers Chris Marrs Piliero and Don Piliero.

If you enjoyed the Prototype film The Liars Chair, let's take a look behind the scenes with Chris Marrs Piliero and Don Piliero, who co-wrote the script which Chris directed.

Q: Who worked with you on the project? How did you pick out the cast and crew?
CHRIS: The most important member of the team just so happened to escape from the same womb as me. My brother, Don, and I kinda fell into the idea of becoming writing partners out of me constantly hitting him up for input on my music video concepts. We quickly developed a very cohesive style together.

My buddy Mike Longenbach has produced for me in the past and upon me briefly mentioning the short he was instantly on board. Mike went above and beyond and worked his ass off to make sure it all came together, so I'm truly grateful to him for helping making this happen.
The rest of the crew was a blend of my talented friends who have helped bring my music videos to life mixed with some new team members who equally rocked it.

Rob Witt helmed the cinematography like a king as he does on many of my music videos. The dude has a fantastic eye. He's the cat's pajamas. Dawn Ritz did such an excellent job creating genuine wardrobe looks for all of the characters. I love the pattern on The Cowboy's shirt and his boots are killer. Bethany Ruck pulled double duty with the hair and make-up. There was a particular style we intended for The Cowboy's do, and she nailed it. When it comes to production designers you want one who always thinks of those little details you missed. Brandon Mendez filled the shows just perfectly. There were certain aspects that we never even discussed that I was stoked to see he made fantastic choices on.

One thing that was very important to me was having the key aspects of the kill sequences be practical and not done with post digital fx. The team over at Sota FX were champs and made sure I didn't have to stray from that goal. They always put extra effort in all of the projects we work on together. They rule.

Ben Robinson's score is awesome. It's subtle where it needs to be subtle, and rocks where it needs to rock. Don played a major role in determining the mood of the score and Ben delivered.
Brett Bach and Ken Cain over at Sound Brigade did an absolutely stellar job on the sound design. They rock the majority of my music videos, but it was such a pleasure to work with them on an actual narrative and let them go nuts with it. The sound design is brilliant.

The entire crew did a great job of helping this sucker come to life. And let's not forget about the awesome cast. They all did a fantastic job with their roles. Eion Bailey, Channon Roe, Rick Overton, Nathan Keyes, and Josh Duhon each played their roles with subtle excellence.

DON: I worked with my brother because he knows how to direct stuff and we are related, so that seemed like a good fit in my mind. 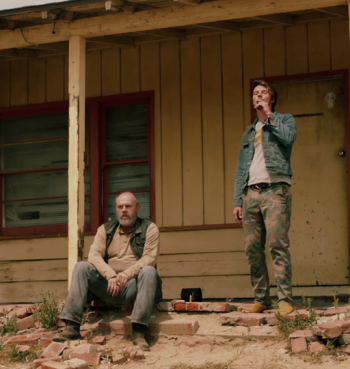 Q: Where did the story concept come from? Did anything in particular inspire this short?
DON: We tend to talk on a regular basis about random ideas we have, so it is hard to pinpoint where a lot of the ideas we kick around actually start. This one I know, in part, came from the idea we had of a guy who fancied himself a cowboy, while never really being one. An urban cowboy, if you will, but slightly better with a gun than John Travolta. For me part of my inspiration was wanting a hero who wore a costume, but not in the super hero sense. Our guy takes a persona, and runs with it. I feel that it's part of why he is able to get away with certain things, such as having a lengthy dialog with a group of criminals. It is very disarming to see a man dressed like a cowboy for no apparent reason in my opinion. You are just not sure what to make of it. And we tried to be very deliberate in making sure that came across. He has no accent. He didn't drive up in a pickup truck. He doesn't have any of the other stereotypical characteristics you could use to imply he had any business being dressed the way he is. Because he is not really a cowboy. His clothes are a basically a costume. I like that about him.
CHRIS: Don and I really connect with characters and dialogue and we loved the idea of a guy who uses language and conversation as a weapon, or at the very least, as a tool in his assault. I just so happen to love the blue corn tortilla chips with flax seed in real life, so one day while I was working on the script in my living room and walking around with a bag in my hands - chomping away - a few of the lines came to me. I quickly jotted them down and sent them over to Don and then we expanded upon it, which led to other details of his character.

When it came to our criminals, we really wanted them to be disturbed early in the morning when they're kinda groggily and not at their A-game. I love that James Docker just went out for his morning bathroom run and doesn't have time to put on pants. He's just stuck looking how he looks as everything unfolds.

Q: How long did it take to write? How long was the production overall?
CHRIS: We wrote this in about 2 weeks with some sporadic tweaking along the way. It was a 3-day shoot with a half-day to do a few pick up shots (we weren't able to get that final car drive-off before the sun went down).

Q: Where did you film?
CHRIS: We shot out in the desert in Lancaster, CA. The weather was so temperamental that it almost sabotaged the shoot. There's probably at least a full day's worth of footage that had to be tossed because the winds got so sporadically insane that the shots just didn't match with the rest of the film. Fortunately it all came together very nicely in the edit and those shots weren't missed.

Q: Do you have a favorite scene?
CHRIS: I have a couple. I love the monologue. Eion does such an incredible job with that performance. He's such a delightful badass. He's talking about retail stores with such conviction... it's a fantastic moment for me. Rather than cutting away, the camera stays with him for the majority of the speech so that we can dive deep into his eyes and get lost in his words as he captivates us over a mundane topic. I love it.

And I'm really stoked on the brawl in the house. I love just having that camera locked off, sitting there enjoying the view as we get little nuggets of the altercation and keen-in on listening to it all go down.

DON: I am partial to the opening scene. I like putting Herschel and Timothy in a pissing match about their particular vice. It was actually one of the last things to go into the script, because we wanted something to start the short before the Cowboy arrives. So I put together the idea of the youngest guy and the oldest guy having this conversation about smoking that I hope humanized our loveable band of thugs just a bit. 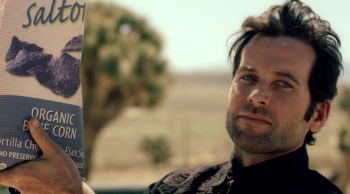 Q: Where did the dialog in this short come from?
CHRIS: Dialog is very important. It's a simple way of peaking into the complexities of a character. We pull a lot of it from our personal lives and an equal amount manifests through the characters we've created. Don had a similar conversation about the vaporizers with a co-worker of his and like I mentioned before, I was eating some blue corn tortilla chips with flax seed while doing some writing and they found their way onto the page. We liked that it was a bit absurd while still being relatable and that it led to the criminals getting roped into the conversation with a comical dispute between them and their own tastes. We love dialog that provides us with moments that show the characters as regular people, no matter how eccentric the character. Whether you're the good guy or the bad guy, we all have common interests and dialogue is the perfect window into showing those similarities.

DON: The dialog that I am the fondest of is rooted in real life. I have notes and notes jotted everywhere, of random things that I have said to coworkers, my wife, and friends during conversations, and I try and use that. It's not word for word by any means -- as I am not as eloquent as I would like to imagine on the fly -- but my day-to-day life is where a lot of my basic dialog concepts are born.

Q: What was it like to film and choreograph the action sequences?
CHRIS: It was my first time getting to do a practical gag of blowing up a body part so that was a lot of fun. We rehearsed the choreography before the shoot day, but it's much different once you get to the actual location. When Channon gets thrown and you see the glass of the window shatter... ummmm, yeah, that wasn't planned. I remember all of us behind the camera letting out a hearty "oh shit" during that moment. Channon didn't get hurt and it's a nice addition to the scene, so it worked out just swimmingly.

Chris Marrs Piliero (Director & Co-Writer) & Don Piliero (Co-Writer)
Chris Marrs Piliero and Don Piliero are brothers. They write stuff together. Chris directs while Don silently judges. They love a plethora of films from the likes of Monster Squad and the Indiana Jones saga to Pulp Fiction and Magnolia. Don is the father of a handsome little boy who is a connoisseur of balloon animals. Chris is the father of two handsome dogs, one of which is a champ at eating his own poop. When not writing scripts together, the brothers collaborate on music video concepts that Chris directs - giving fans a shit-talking ass-kicking Britney Spears, pitting Ke$ha against James Van Der Beek in a Unicorn laser gun battle to the death, and winning an MTV VMA for Breakthrough Video for The Black Keys featuring a love-scorned rumble at the playground. Chris and Don don't know what the future holds but one thing is for sure, they will unfortunately remain brothers.