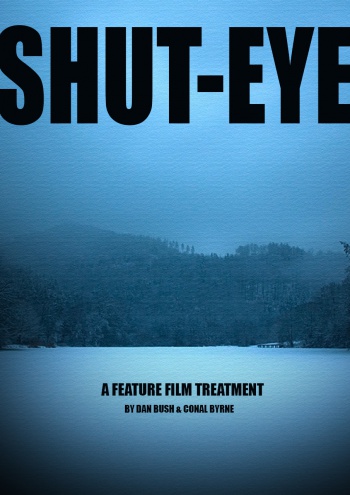 Go behind the scenes of Shut-Eye in our interview with filmmakers Dan Bush and Conal Byrne.

If you enjoyed the Prototype film Shut-Eye, let's take a look behind the scenes with filmmakers Dan Bush and Conal Byrne. Bush directed, which Bush and Byrne co-wrote the script.

Q: Who worked with you on the project? How did you pick out the cast and crew?
A: To pull off an entire world on a shoe-string budget you have visionaries. Bad-asses. I have been working with this team in some form or another for years and we have a shorthand. It's a family. This is a team of amazing artists that are as fascinated with this fictional world as I am.

There was no one better suited to play the lead than Conal Byrne (also the co-writer). He is just a phenomenal actor. We have been making movies together for 20 years. Chris Campbell is an amazing cinematographer that I've worked with since my first feature film The Signal. He also joined me for The Ghost of Old Highways. He is a badass who will attempt nearly anything to augment the vision.

Jessee Clarkson, my production designer has also worked closely with me for many years. We used to be in set construction together. He is a true visionary. A sculptor. He always brings his own very unique designs to the frame -- creating living spaces -- he's is always thinking about the history and future of a set or a prop, and his designs are always functional yet slightly "other-world."

My lovely wife, Caroline Dieter, was our costume designer. She is a badass. She begins with the characters and the circumstances of the world and builds these looks that surpass my imagination. She's done every movie with me.

And there's no way we could have pulled this together with out Ben Lovett, our sound designer and composer. I've worked with Ben on everything I've done. Talk about passion and perseverance and creative genius -- Ben takes the vision to a whole new level. After all, half of the movie experience is what you hear. Definitely listen to Shut-Eye with quality headphones!!!

Anna Stachow, our make-up -- she drove to Atlanta on her own dime with her own kit and fucking rocked it. Andrew Donoho, our lead VFX, Is someone I met recently. He is a director himself so we have a shorthand. He understood right away the scope of Shut-Eye and how to make it look and feel real. We also had help from Michael McReynolds -- another VFX designer I've collaborated with for years. Alex Motlagh produced it with me. He brought seemingly unlimited resources to fuel us on the front line.

We were also lucky to get to work with Spencer Jarvis, our AD. He came from The Walking Dead team. Also Elizabeth Davidovich our stunt coordinator and Philip Dido, Conal Byrne's stunt double. The highest level of professionalism meets radical creativity with these guys. Our art director Aimee Holmberg was unstoppable -- These are just a very few of the amazing people poured their hearts into this and worked their asses off with passion and professionalism -- but the list is long and I can't name them all!

Q: Where did the story concept come from? Did anything in particular inspire this short?
A: I was driving along a rural state road in North Carolina a few years ago blasting Radiohead's KidA -- completely zoning out (there are few things that will get your alpha waves juiced for a darkly futurist, sci-fi drama more than a long drive through the middle of nowhere while blasting Radiohead). I drove forever -- through endless fields and mysterious forests, along a cracked two-lane black top, with no civilization for an hour or more. Eventually I came upon an old abandoned truck-stop-diner. Not some corporate mega-truck stop broadcasting at the edge of a 6 lane highway, but an old family style filling station. The structure seemed ancient -- it was like ruins from another time -- a relic of a forgotten American past. But the sensation I had was that I was actually visiting from the future. That the future is now.

I pulled into the ruined, crumbling gas station's cracked asphalt lot. The windows were smashed, the broken neon sign dangled from rusted wires. Weeds grew. I stepped through an open door and walked through the place. "Even if we could reverse the progress trap -- even if we wanted to return to a genuine place -- revert to a more honest version of ourselves -- how would we do it? Where would we begin?" I thought as I stepped up to a chrome mirror on a wall inside the place. My reflection bent in the milky dented metal. Then I thought, "we would have to go inside -- We would have to battle ourselves..."

Also I was inspired by the dystopian work of Simon Stalenhag, an artist based in the countryside outside of Stockholm, Sweden.

Q: How long did it take to write? How long was the production overall?
A: I had written the original script ten years ago with a very different character in mind. It was more of a Twilight Zone piece then. Conal had the idea of a mind-app that eliminated the need for sleep and we sort of combined the two.

This provided a new opportunity to do something that imagined a futuristic corporate drama of sorts -- and that led us to Max Fuller, our prince of the corporate world, our Hamlet, a future Steve Jobs. Once we figured that out the script was written in a day.

Another cool thing -- I asked my actor friend Berny Clark to do an "audiobook" style reading of the script. It was fantastic. I used his reading, along with the storyboards, to inspire the cast and crew.

Q: Where did you film?
A: We filmed in Georgia. Partly on a sound stage and partly on locations near Atlanta.

Q: Do you have a favorite scene?
A: I love the diner scene. It just feels haunted to me.

Q: What about a favorite memory from shooting or production?
A: We almost got shut down at one location. There was a mixup about our location contract and permission to shoot was suddenly in question. This asshole walked into the middle of the set as we were about to get our first shot of the day and he was ready to fight. He was screaming that this was his place and we had to get out immediately. He said he had already called the cops, etc. So, while I was freaking out trying to calm him down and negotiate, Chris Campbell and the crew started rolling on the shot they were setting up. It was a 1000 FPS shot and we were loosing the weiss-cam later that day. I love that the crew was unified to protect the movie. Fucking awesome.

Another memory: We had a packed morning on the sound stage. We wanted to let the crew off early that day because that afternoon was the wake for Sarah Jones. Practically every one on our crew knew her well and several people, especially the camera department, were very close to her. I got the sense that it could have just as easily been any one of them who had ended up in that set instead. Anyway, we wrapped early, but the thing is the crew busted their ass to complete the full day's work before we rapped. It was overwhelming. We were blessed to have such fucking amazing people.

Q: What was it like to film and choreograph your big action sequence?
A: Of all the planning, scheduling, budgeting, coordinating, my favorite thing is to work with Elizabeth Davidovich and her stunt team. It's like being a kid again. We went to her place S.M.A.S.H. and spent a weekend developing the fight scene. In the scene our lead has to battle a bad version of himself.

There is a ton of cinema math to it because Conal, our lead, had to play both parts. So he and his stunt double, Philip Dido, had to know both sides of the fight in and out. We thought it would take longer for Conal to pick up the moves and the stunt techniques safely, but he was up and running in a matter of hours. Before we left the first rehearsal it already looked violent and very real.

Q: Was anyone in particular the inspiration for your tech luminary protagonist?
A: Not really. It's Steve Jobs meets Hamlet I think.

Dan Bush (Director & Co-Writer)
Dan Bush is in an American director, writer, producer, and editor. He's been making movies as long as he can remember and by any means necessary. His Films are dark, his stories are deeply emotional, and his narrative structures are mind-bending. In 2007, Dan co-directed The Signal. The film premiered at the Sundance Film Festival, was bought by Magnolia Pictures, and was given a theatrical release. The Signal was nominated for several awards including Best Picture a the Sitges Film Festival and the John Cassavetes Award at the Independent Spirit Awards. In 2012, Dan directed The Proxy, a sci-fi thriller, and his award winning Ghost Of Old Highways. Dan founded Psychopia Pictures in 2003 directing two experimental films, A Day InThe Life, which premiered at the 2006 Atlanta Film Festival, and E-Motion Studies, which premiered at the 2007 Atlanta Film Festival. Beyond these projects, Dan is also developing, The Trust, and Aurora.

Dan loves cinema in all it's forms, but 20 films that completely re-aranged his brain were (listed in no particular order) The Graduate, Drugstore Cowboy, One Flew Over The Cuckoo's Nest, The Last Detail, Dog-Day Afternoon, Dr. Strangelove, American Warewolf In London, Close Encounters of The Third Kind, Blade Runner, The Thing, The Shining, Last Temptation of Christ, Return of The Living Dead, Miller's Crossing, Jacob's Ladder, Do The Right Thing, Goodfellas, Adaptation, Reservoir Dogs and Children of Men.

Conal Byrne (Co-Writer)
Conal Byrne is a screenwriter and actor. He wrote and starred in the recently completely sci-fi thriller THE PROXY, directed by Dan Bush (THE SIGNAL) and starring Amy Seimetz (YOU'RE NEXT / UPSTREAM COLOR). He also co-wrote THE TRUST with Dan Bush, now in development, and is currently co-writing with Bradley Cooper a screenplay for the well-known sci-fi book series, HYPERION, with GK Films.