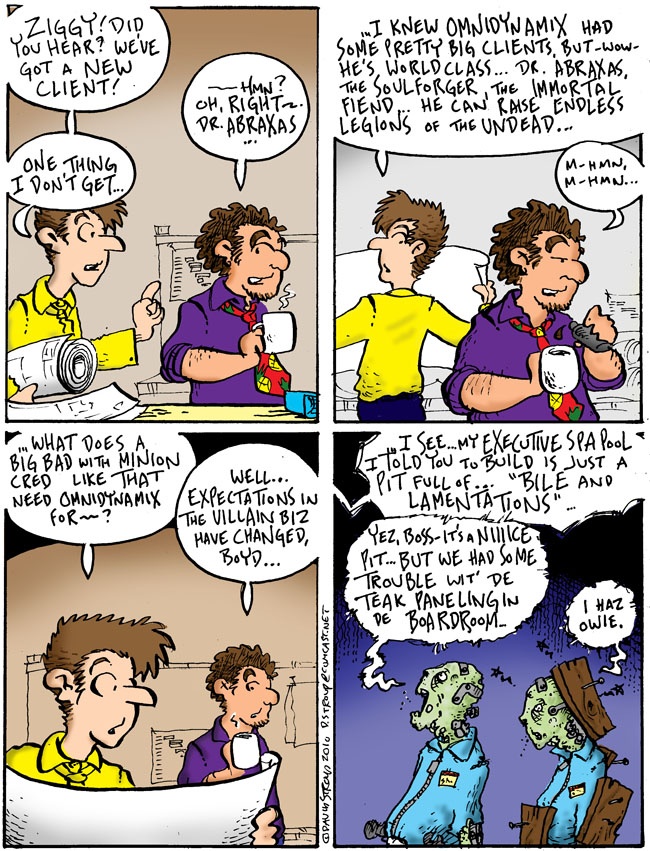 Comic Description:
"Omnidynamix" is a workplace comedy about a group of average, cubicle-dwelling 20-somethings who work at a large bureaucratic company that serves an exclusive client base of villains. Supervillains, anime villains, video game final bosses, and "Bond" villains all have something in common: they need large, unnecessarily complicated lairs. And, sometimes, orbital death rays. Occasionally, they just need to outsource laundry services for their minions' matching jumpsuits. Omnidynamix (the company) provides engineering and project management services... anything from installing a 30-million-gallon shark tank to upgrading the infrastructure of the third-world island nation you just blackmailed into making you God-Emperor. Because, really, you didn't get into the villain game to deal with subcontractors, did you? "Omnidynamix" the webcomic isn't ABOUT video games, as such, but it will draw on the tropes of games - as well as genre conventions from comics and movies - for humor to appeal to people who play video games (and read The Escapist). It will be a continuity/gag strip in the mode of Goats or Sluggy, with humor, ongoing situations, and character development. I have been drawing strips (sometimes in local newspapers) and doing freelance cartooning for decades; I have done a three-a-week strip (www.yossarian.org) for several years now, maintaining a regular schedule (it only went on hiatus so that I could prepare this entry). I am prepared to commit to your schedule, and with my experience, record and workflow I will meet it. I hope to have the opportunity to talk with you about my plans for "Omnidynamix."
Comments [202]