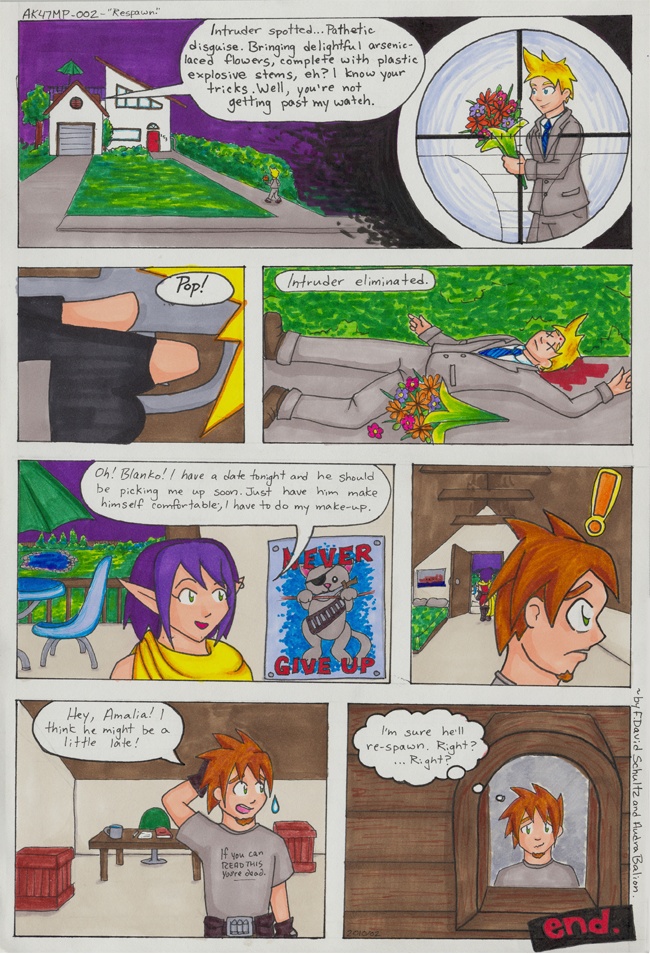 Comic Description:
Hello!I am here to talk about the submission AK47MP written by me (F. David Schultz) and illustrated by my partner Audra Balion. We have been doing comics, art, and theatre projects together for over five years and AK47MP is our latest work. We have both always been interested in the fantasy genre and role playing games, but I wanted to do something a little different for a comic for The Escapist Magazine. The Escapist already offers fun videos for the fantasy RPG crowd in Doraleous and Associates (and previously in Unforgotten Realms), and so I wanted to go beyond that. While I'm not much of a gamer beyond my fantasy, I have been slowly become introduced to first person shooters, and thought that joining FPS and RPG would both be a lot of fun, and be something for the wide range of video game fans that The Escapist attracts. So, I took a sniping, gun-loving, guy and a flirtatious elven mage and made them best friends. When I write comics, I try to develop the characters and flesh them out as time goes on, and then the humour (ideally) comes from their own character quirks, flaws, and interactions rather than basic one-liners and the like. I want a comic that will keep people coming back to see what new situations these characters will be caught in, and how they'll handle them, rather than a joke-of-the-day calendar. Audra draws all of the comics by hand for this one, colouring by marker, and giving the comic a more organic feel than photoshop. Most of her comics had been done in black-and-white, previously, as they had been published in school newspapers. She wanted to throw out all of the stops for The Escapist and present something in vibrant colour. This also shows the vast difference between the two main characters: Blanko and Amalia. Blanko, in his gun-metal grey shirt (actually, Audra corrects me that she bought a different grey marker for the guns) and Amalia wearing vibrant red and yellow drive the point home that these two are from very different places. The idea is that Blanko and Amalia are like video game characters, but they are actual people in our modern world, and that you could find them living right next door to you. Then, at the same time, they can be in a mystical forest, or in the middle of a war zone, or battling against one another in a pie-eating contest. The goal is for wackiness, humour, and--most importantly--fun. The title is meant to draw everything together. An AK-47, and the idea of limited, numeraical Magic Points as popularized by games like Final Fantasy. Thus encapsulating both characters and the whole idea of the comic in one simple "word." Just to let you know a little about ourselves: Audra is in her third year of university as a studio art major, and I am a former university, previously studying in acting. We live and work in Saskatchewan, Canada, are cat people, and enjoy scaring "normies." This is probably more than you needed to know for a simple comic contest, and I shall now move on to a concluding paragraph. Thank you for your consideration in this contest, and if AK47MP is chosen, you can be sure that we won't let you down.We're very excited by the prospects of this competition, and hope that we can make many more comics (I've already written a half dozen more in anxious anticipation). Hope to hear from you soon. All the best,F. David Schultz
Comments [202]