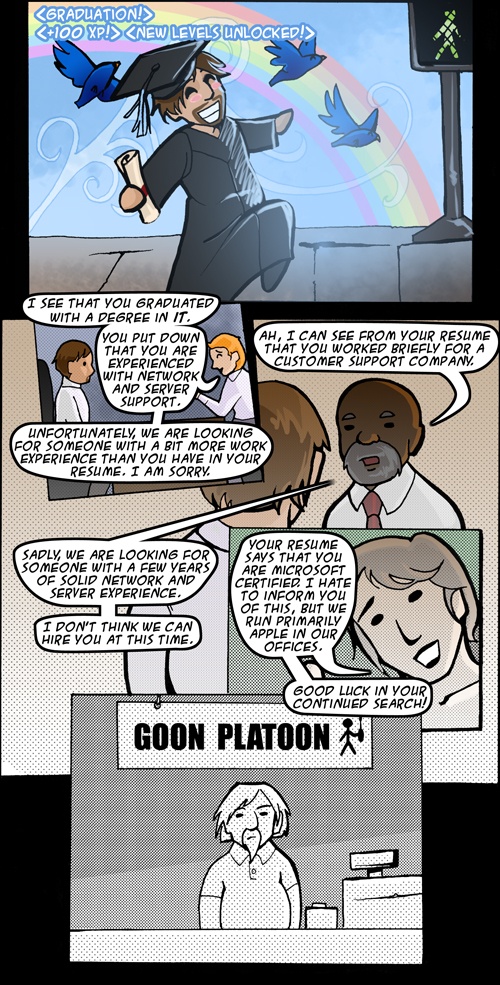 Comic Description:
Our comic is titled "What Are The Odds?" This is a collaborative effort between myself, Michael Willett (Talthos) and Emily Karnes (Silkspinner), the creators of www.ComplexActions.com. The premise of "What Are The Odds?" is the idea of finding companionship in the oddest places. The synopsis is as follows:The main character lives with his roommate, both with jobs in different fields. His roommate is much his opposite in many things, but they have been friends from school. Through gaming, he meets a girl (the one introduced in the fourth comic), and an international online relationship begins to form, born in the aftermath of many headshots and frags. Our plan for the comic would be to tell the unusual friendship of the man and his roommate, the blossoming relationship between the main character and his online love interest, but keep the theme light-hearted and well-paced. We do not wish to get embroiled in an overly-dramatic love-saga, but to show an ongoing story with a "joke-a-day" feel. We feel that this topic is fresh and new, but still holds some of the common elements of existing well-written comics. The overall theme of the comic is "gaming", in which console and PC gaming will be the vehicle for all interactions between the main character and the object of his growing affection. This is a subject that is a growing phenomenon in the gaming community, and seems untouched in the webcomics world. Further, we want to steer away from many of the "usual" stereotypes of gamers, as we do in our own mainstream comic. Lastly, we did not want to go with the usual "college students" or "magical pets" that seem popular with many other titles. We have no problem with the suggested two-update-per-week schedule in your contest writeup; further, as our readers will attest, we have yet to miss an update in our own M/W/F comic (knock on wood!) We look forward to hearing from you all, and thank you for your time in reviewing our submission. We are huge fans of the Escapist, especially Zero Punctuation, Escape to the Movies, and Unskippable! We think our sense of humor and commitment to our readers would mesh well with your existing content and staff. Regards, Michael Willett and Emily KarnesCo-Creators, Complex Actionswww.complexactions.com
Comments [202]