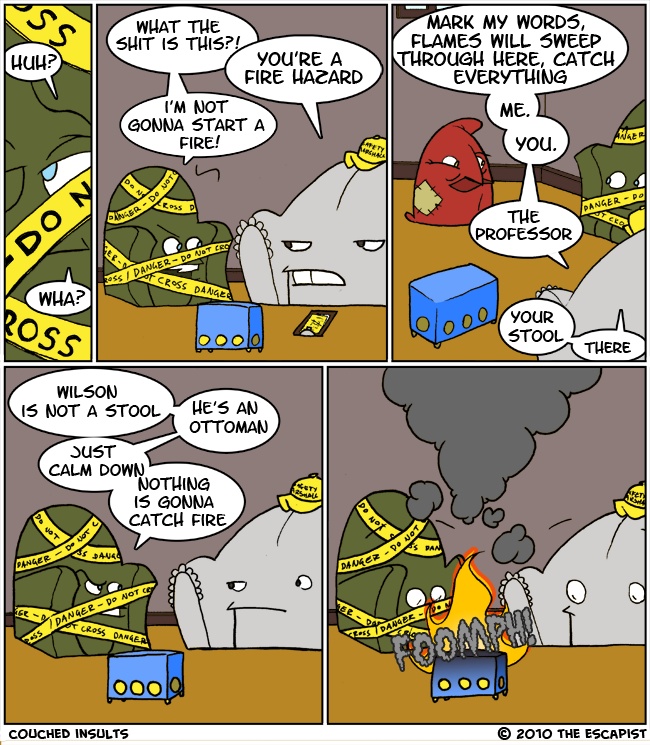 Comic Description:
Couched Insults follows the exploits, fantasies and failures of the furnature in a gamers' basement. Cline the recliner is naive, impetuous and stubborn to the point of exhaustion. He accepts any fantasy as reality, but thinks outside of the box. Troy the two seater is a sarcastic shut-in. Though he's technically the "youngest" he knows what they are and the limitations they face. He says he's a realist, Cline says he's a pessimist and the Professor says he is "That wide pale feller." Professor Beans is an old bean bag who's as wise as he is senile. His patchy, saggy exterior belies a loyal and honest guide and behind that lies styrofoam beans. Wilson is a footstool and pet of Cline. He acts as a mascot and occasionally bursts into flames. Ideas for upcoming strips:Late To The Party; where the cast explore games from 2+ years ago from their unique perspective.Troy gets a job at World of FurnatureCline and Troy attend an in-game funeral for a randomly murdered npc.Cline brags about joining a gym only to pull out his "back" when reclining.A ball falls downstairs and Troy is attacked by the "Tank" the dog. Ideas for further characters:"Tank" the bipolar Chihuahua"Lady" the Cavalier Spaniel in love with Wilson"Lena" the swedish futon"Arthas" Troy's boss at World of Furnature"Scarlett" A four year old with a potty mouth.
Comments [202]