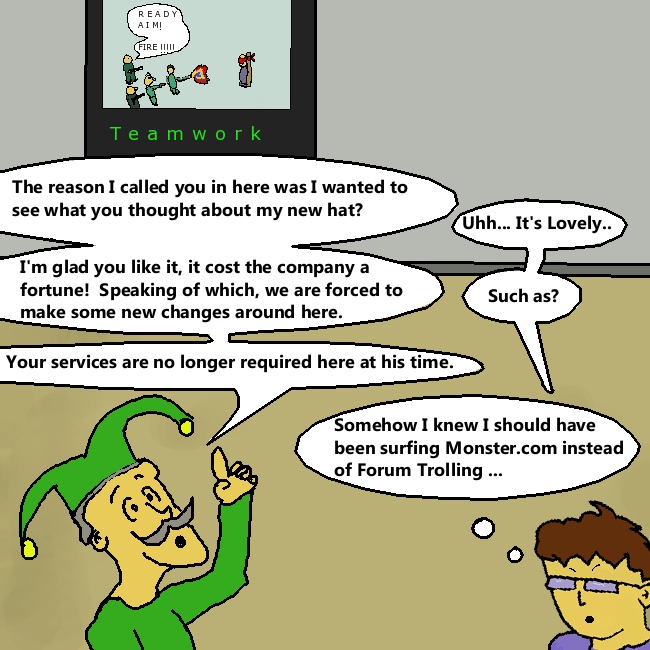 Comic Description:
My Web comic is titled Call Tech Support. In light of the economic conditions, I myself have been without work due to layoff over the last year. I spent quite a bit of time when not searching for work interacting with other gamers on the internet. I have found so many other players that are in my same condition, that I decided to write a comic about it. You could even say I spent the last year researching the character if you will, heh. Things start off with our hero being called to see his boss. You can see that the boss is not a very good one and not wise with mangaging the business. Needless to say, they let our hero go. Later we see our hero illuminated by the dim glow of a game marathon, with various messages being left on the answering machine from the boss asking for help. I myself have found that I have had to go back and d tech work for the very place I was let go from since they do need my skills, they just can't afford to keep me on there. But I have seen other techs going through this as well. And to close the comic, we find the boss with another bad investment made that has him unable to notice the server's actions. At this point, it seems the server does some sort of bioscan and notices that the IT guy is no longer around. Then it runs an AI program and becomes self aware leaving you wondering what will come of this. Our hero was the only thing keeping this computer in check, and now who knows what it will do? I have spent the last several weeks reworking the comic with various upgrades and joke reworks. And I have tested it on various segments of the friends I know locally and on the internet, and the feedback has been great. Although what I came up with was 2 version of this same comic with a couple different jokes written in there instead. I am still totally unsure through my research which versions to send, so I can only hope I pick the one you find most favorable. But if you are interested in the alternate panels, PLEASE ask, as I have a couple different spins I use and would be more than happy to send those as well. I have been following Escapist Magazine for a while now and have my brother and various friends hookedon the series that you support. And it would be a dream to be able to be part of something like that. I have an HP Touchsmart laptop I can use to do the graphic work with, althogh I try to rely more on the content of my styles than the graphics themselves. But the stylings I wanted to mimic would be a Dilbert/Office Space/Far Side more tradition style for the comic. I see all the new fancy work some people do and could spend the time to flesh them out more deeply. But I understand this is not only for the contest but that you would want to be able to make 2 of these a week. And that allowes me to spend a day or two on each one since I have the time and could reproduce this quality and better in time. I can even redraw, design or make any changes you might feel that would work better with the elements of this series. But it seems to me I have not seen this form of content yet. Most are just dude and dude sitting on a couch with a couple almost har har jokes. I want something a bit more. I want to try to do somethng like what you produce here that leaves you going okay, I see this character I understand what is going on, but what will happen next? Unforgotten Realms and Apox. Lane have it down to a T pretty much. And I want to do something that has a story arch to it, and will be able to be topical as well. I didn't get to do as much direct gameplay and such in these panels as I would have liked as this is a pilot. I wanted to flesh out the story of what happened, to who, and leave you to wonder where it shall go next. That being said, I thought I got the world created in the limitation of 4 panels, but it leaves me with much more room to focus on more of the game issues as the come up. I play and beta all types of games, so I play the games, see what the fans and myself have to gripe about, and then can use the comic as a medium to let people feel that same pain. If you want to see some of my video work check out www.youtube.com/mattdawg420 (My latest game to do a video on is Beta for Mortal Online which is growing in popularity by the day. Each week or two some new game is about to come, does come out, or will be coming out. This allows me to deal with topical game humor to tack in there while I continue the story. I have a vision of where this can go, and have the time to do this. So if you are looking for someone to make a new cartoon series for your site, please consider me. I am sure some of the mutli-person projects will shine but can they do 2 of those a week? I believe I can do it, and hope you give me the chance to be part of the team. Thanks for taking the time to read this and look forward to hearing from you. Sincerly, Matt Easley
Comments [202]