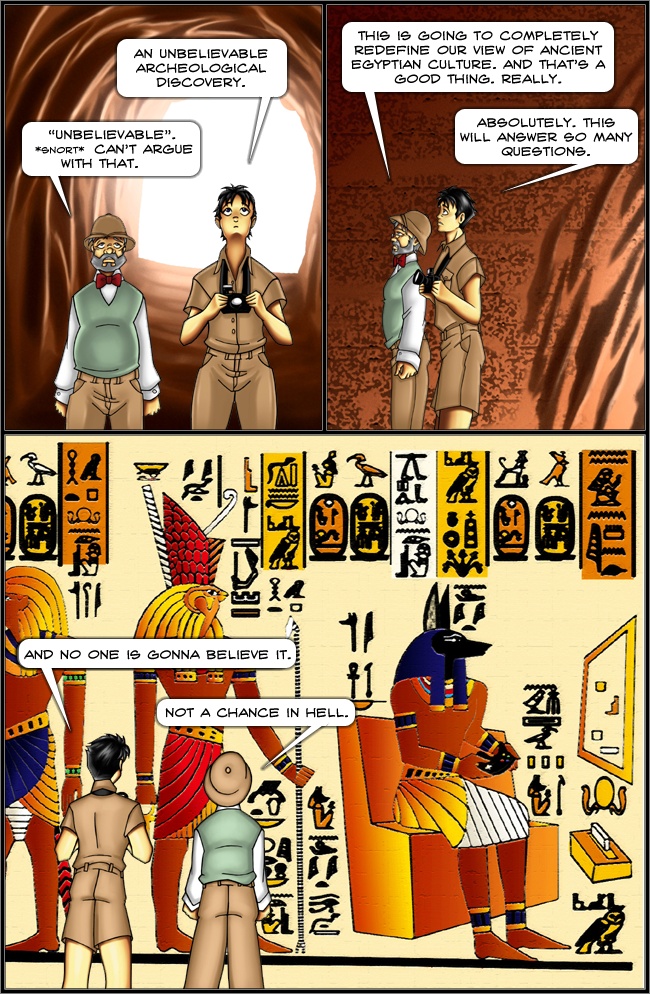 Comic Description:
AnubisWritten by Erik ThackerIllustrated by Marisol Puente This is the story of the great Egyptian demi-god Anubis and his unlikely human friend Christa. Anubis when introduced to video games, movies, and a part time job (a chance to be useful again) in a world that has long regarded him as fiction decides these are very fitting ways to pass eternity. Anubis chose this path after sealing himself in a long buried tomb to guard the last and late great king of Egypt. It was all going so well - an eternity in darkness and quiet - until a clumsy, young girl fascinated with his existence happened upon the tomb and convinced Anubis to come to America and experience of Drive-Thru hamburgers and 8 bit video games. Anubis, while a god by definition, is not all powerful. As a god of death and later embalming he has a direct line to the spirit world and often abuses it to summon friends of convenience to fill slots in whatever multi-player game catches his interest. But not everyone is unaware of Anubis' activities. A rival from his past 'set's to send Anubis back into exile. Manipulating the very characters of the games Anubis' so loves into reality to turn against him. Editor note: Anubis is a "new" comic. We produced the four in the last two weeks. We looked across the internet for anyone doing an Anubis comic already and were surprised to find that no one was. We feel there is plenty of story arcs, cynicism, satire, and gag comedy for hundreds of comics if not on the premise of two interacting characters and the thousands of games they can play alone, but also the existence of rivals, Anubis' mythology, etc. We had a dozen good comic ideas but we felt that the premise of a god coping with being immortal by passing the time by playing video games was unique and fun to write about. Thank you for your time and we look forward to seeing the winner(s).
Comments [202]