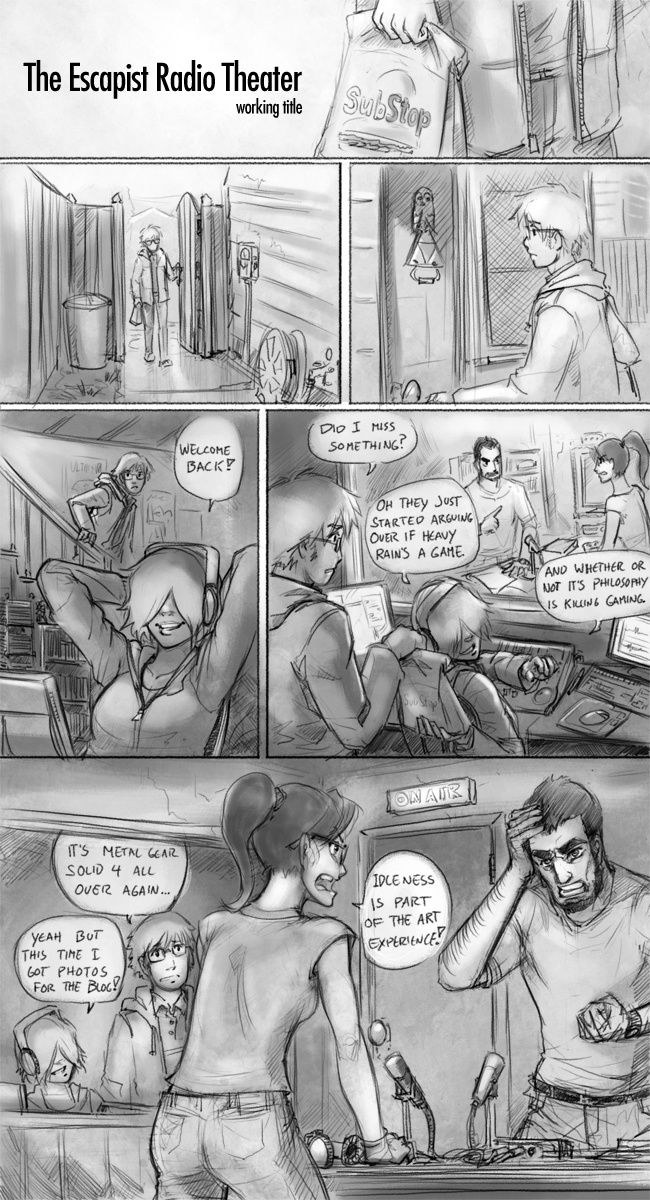 Comic Description:
I feel I should explain the title, as I can imagine that's one question that crops up. This project was started with The Escapist in mind, from its quirky audience to its openness and breadth of content. And of course, this webcomic contest. I saw no reason not to name it after this site. The rest of the comic, simply features a group of friends who are in possession of a great basement recording studio. From there, they manage to pump out a podcast or two, and the occasional livestream of videogame related news and commentary. But really, it's just an excuse for them to hang out. And the comic is an attempt to get across that sense of slice of life without forgetting the games that bring them together. There are no great pretenses. It's not really more than what you see, despite there being a few characters not really touched upon in the strips provided. It's just a small comic about people, written without grandeur or great embellishment.

The art. My goodness. Every one of these is a delight to look at. I'm aware that the scratchy pencil style is controversial, and at any given time you can type "Megatokyo" into Google and be whisked away to a boiling forum thread where people debate whether or not this is a "valid" style or whatever it is that self-important wankers say to convince you to stop enjoying something. Whatever. I put word bubbles on screenshots so I don't have a stake in the battle between art styles.

In any case, I actually like this more than Megatokyo. I was really sad when I ran out of strips. I love what I saw, and I'd love to see more.

The dialog isn't really jokes so much as just interesting conversations about games. That might be a tough sell for a lot of readers. This series would live or die based on the strength of the art and the charm of the personalities. While the former is solid in my mind, the series would need to establish itself before we could judge the latter.