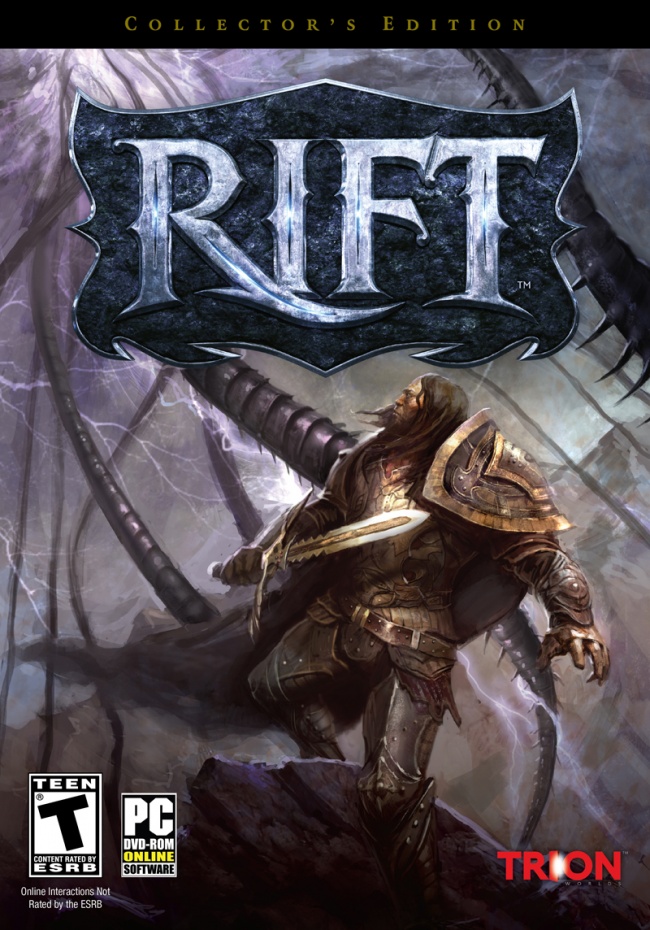 RIFT™ is the complete MMO experience you've been waiting for! Dynamic conflict and a revolutionary class system await you in this world besieged by the elemental planes. Want to try it out? Grab a VIP key for their upcoming beta events! We even have an Escapist guild for you to join.

Adventure in the world of Telara as either a noble Guardian or technomagical Defiant and enter a dynamic fantasy where 8 primal forces battle for control and the landscape is ever-changing. Build your own class using the Ascended Soul system and embark on epic battles that bring you into the story to take your RPG experience to new heights of achievement and excitement! To start you out running, we have 5000 VIP keys to give away. Each one of these keys will get you into each of Trion's upcoming beta events. Once you get in the game, look up The Escapist under guilds and ask someone for an invite. The bigger we become, the more sections of the event we can participate in. Plus, why wouldn't we want to be the biggest guild in the game?

Eight forces all vie for control as the battle for Telara rages on! Take up the mantle as a noble Guardian or a techno-magical Defiant to confront extra-planar forces and enemy players as you explore this dynamic world.

Play to win! Defeat any player of the opposite faction in Scarlet Gorge or a Warfront and you could be eligible to win an NVIDIA GeForce GTX 460 video card! Terms and conditions apply, click here for details. And In-Game Prize Packs will be given away to ten (10) select players who complete the objective!

Telara is left in chaos as the elemental planes force their way into reality. The armies of Earth, Water, Air, Fire, Life, and Death launch devastating invasions through the rifts opening across the land. Beat back the invasions and eliminate the planar blight that's eroding this once-peaceful world.

Play to win! Seal any rift and receive planar loot and you could be eligible to win an NVIDIA GeForce GTX 460 video card! Terms and conditions apply, click here for details. And In-Game Prize Packs will be given away to ten (10) select players who complete the objective!

A tireless and unending horde, invaders from the planes continue their assault on Telara. The final (beta) battle is at hand and the fate of the planet depends on the courage and strength of Telara's champions. Become one of the Ascended and fight for a world that's on the brink of losing all hope.

Play to win! Defeat any dungeon boss and you could be eligible to win an NVIDIA GeForce GTX 460 video card! Terms and conditions apply, click here for details. And In-Game Prize Packs will be given away to ten (10) select players who complete the objective!

The contest has ended!

Thanks for your interest, but this contest is now over. Keep checking The Escapist for more contests and giveaways in the future.

By participating in this contest, contestants grant Themis Group, Inc. the right to print, publish, broadcast and use worldwide in any media now known or hereafter developed, including, without limitation, the World Wide Web, at any time or times, the contestant's name, as news or for public information and education without additional consideration or compensation. Any entry becomes the property of Themis Group, Inc. and will not be returned. Entrants surrender copyright and all interests therein of their submissions to Themis Group, Inc. with the understanding that the materials may be used for promotional purposes.

By participating in the contest, you acknowledge that you have reviewed and agree to Themis Group, Inc.'s privacy policy.

Employees of Themis Group, Inc., and its subsidiaries or affiliates, and any family members and/or household members of these employees, are excluded from the contest.

Entrants release Themis Group, Inc. and its respective parent divisions, affiliates, officers, subsidiaries, agents, employees and all others associated with the development and execution of this giveaway from and against any liability with respect to or in any way arising from this contest and the awarding and use of the prizes.

Participation in any part of the Themis Group, Inc.'s "RIFT VIP Key Giveaway" implies an understanding and acceptance of these rules and regulations. Trion Worlds, Inc. is not a sponsor or administrator of this offer and assumes no responsibility for this offer.