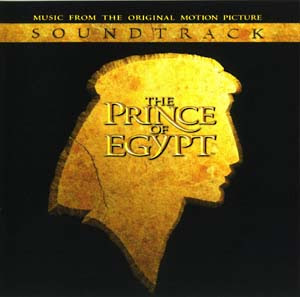 What's that you say? Why am I covering The Prince of Egypt, when I have already singled it out as an award winner and early success? Well, to tell you the truth, much like with Spirit: Stallion of the Cimarron, the reception hinged mostly on the pop songs, and not the score. That is to say, recognition by association. Although, in this case, I actually liked most of the songs here, particularly "When You Believe" and "The Plagues", with the former being a suitable duet of two female singers, Michelle Pfeiffer and Sally Dworsky, and the latter an enthused and appropriately bloodthirsty-sounding medley of choral bombast and dramatic vocal work by Ralph Fiennes and Amick Bryan. The brutality of the choral lyrics is amazing, especially when juxtaposed with the relative gentleness of the main singers. But that's not the main focus here; Hans Zimmer goes against his usual nature of integrating a number of central themes and motifs throughout the soundtrack, instead letting each track stand by itself as a singular accompaniment to an individual and powerful scene from the movie (again, one of my favorite animated films). Such standout moments include the awe-inspiring and ethereal quality of "The Burning Bush" and the somber tones that form "Death of the First Born". "The Burning Bush" employs both Hans Zimmer's trademark swells that fit the emotional context of standing before Yahweh, the kind of guy that doesn't take crap from anyone, yet being, at the same time, merciful towards those he needs later on, which is marked by the soothing vocals of a female chorus. "Red Sea" is a fine concluding piece, as it retains a key vocal motif from the main theme and "The Burning Bush" and appropriately blows it up to accompany the Red Sea closing in on the Egyptian army. The final point to make is that this one of the very few animated movies in which the songs and the score actually go together amazing well, instead of alienating each other. Hans Zimmer's grandiosity making its way into the songs, and the songs' melodies making their way into his instrumental music. It ends up being a very well rounded and worthwhile score.

You could definitely argue that, by being Hans Zimmer's most recent work to date, the score to Angels & Demons has no business here. But I think it's worth it to consider how the apparent mediocrity of the movie may have affected the coverage afforded to this specific soundtrack. Back in 2006, The Da Vinci Code had generated both generous hype and controversy. I technically have to be objective about this, seeing as how I've neither read the books, nor seen either of the movies in their entirety, but people have apparently since then wisened up to whatever flaws mark Dan Brown's series. However, Hans Zimmer's score for The Da Vinci Code has become a favorite among fans, with "Chevaliers de Sangreal" being the standout track, which I never understood; for me, "The Citrine Cross" and "Rose of Arimathea" are definitely the highlights of the soundtrack. But for all that, I do consider Angels & Demons to be a superior and more mature soundtrack. This time around, Zimmer eschewed esoteric religious tropes and chants in favor of a developing an overall richer scope of crescendoes, melodies, and the like. As it stands, the choral segments and the violin work done by Joshua Bell, not to mention some frantic percussive motifs here and there, make this one of the most fulfilled Gothic compositions yet. The nearly industrial-sounding "160 BPM" puts forth an all-too-rare synthesis of a dark and adrenaline-rushed chorus and a restrained percussive arrangement early on (similar in essence, then, to "The Kraken", my favorite piece out of all the Pirates scores), to be steadily replaced by booming arrangements, while "Air" is the most dynamic, starting out with shimmering strings and what can best be described a Gregorian chant, dipping into a light synthesized respite before kicking off again and building up to an orchestral flurry before settling down again. Another stand-out piece is "Science and Religion", which, quite symbolically, contrasts both electronic vistas of meditative sound and traditional instrumentation. The sustained tonality of the piece is not unlike a Vangelis epic. The final piece, "503", is a retread of "Chevaliers de Sangreal" and at around two minutes, it doesn't overstay its welcome, with Zimmer apparently being content to let the rest of the score carry the weight of the film. The end result is a deliciously evil-sounding, yet relatively soothing treatment, even if some unnamed tracks don't rise to the occasion as they should.

If there was one criticism I had to make about Hans Zimmer's work on The Last Samurai, it was that, for all of his efforts, the score still didn't stray far enough from Western-style orchestration and didn't stray far enough into the traditional Japanese themes. Too often, the peaceful and evocative sound was shoved aside to make way for more overbearing and dramatic pieces. On the other hand, however, there's 1995's Beyond Rangoon, a drama depicting the events of Burma's 8888 Uprising. Instead of hanging on to symphonic, epic themes, Hans Zimmer went full steam ahead with integrating wood flutes, pipes, drums, and piano into a full-fledged composition. There are recurring traces of heavy bass, compliments of the heavy electronic phase. There is less focus on beats or build-ups, and more on ethnic melodies, and poetic melodrama of the strongest variety. If Zimmer had retained some of this Asian sound and made it the focal point of the overall score for The Last Samurai, the end result would have been more favorable and better off for it. The opening titles, "Waters of Irrawaddy", is an enthusiastic entry point, implementing all sorts of instruments to enhance the mood of the scene, one such example being that which sounds like chirping crickets. The second track, "Memories of the Dead", takes an ominous, if short-lived turn, with flutes and female vocals making up most of the two minutes. From hereon, there is little deviation from this formula, although it works very well throughout. The crowning moment is the ten-minute-long suite, "Beyond Rangoon". It's the emotionally definitive piece, assorting all the best cues and rhythms in a pattern that suits the path that the movie takes. As it stands, this soundtrack and the one for The Lion King are the best testaments to Hans Zimmer's skill with ethnic material.

Hans Zimmer will be composing the score for Guy Ritchie's upcoming film, Sherlock Holmes; I'm looking forward to seeing how he works with 19th-Century English intrigue and action. He's also composing for yet another romantic comedy (I'm going to be honest, that is not his genre) called It's Complicated. We'll just have to wait and see, won't we? I heartily wish Hans Zimmer good luck in all his future ventures, and I hope you enjoyed and/or learned something from this article.

And now, for some bonus music tributes, remixes, and more! Thank you for your time and patience, or, if you skipped down to the bottom, never mind. I'll just thank you for clicking on this topic to begin with. Feel free to comment and discuss.PHA+PGRpdiBzdHlsZT0idGV4dC1hbGlnbjogY2VudGVyOyI+PG9iamVjdCB3aWR0aD0iNDMyIiBoZWlnaHQ9IjI2OCI+PHBhcmFtIG5hbWU9Im1vdmllIiB2YWx1ZT0iaHR0cDovL3d3dy55b3V0dWJlLmNvbS92L21VRTNkcHdlSjFnJmFwPSUyNTI2Zm10JTNEMTgiPjwvcGFyYW0+PHBhcmFtIG5hbWU9Indtb2RlIiB2YWx1ZT0ib3BhcXVlIj48L3BhcmFtPjxlbWJlZCBzcmM9Imh0dHA6Ly93d3cueW91dHViZS5jb20vdi9tVUUzZHB3ZUoxZyZhcD0lMjUyNmZtdCUzRDE4IiB0eXBlPSJhcHBsaWNhdGlvbi94LXNob2Nrd2F2ZS1mbGFzaCIgd21vZGU9Im9wYXF1ZSIgd2lkdGg9IjQzMiIgaGVpZ2h0PSIyNjgiIGFsbG93ZnVsbHNjcmVlbj0idHJ1ZSI+PC9lbWJlZD48L29iamVjdD48L2Rpdj48ZGl2IHN0eWxlPSJ0ZXh0LWFsaWduOiBjZW50ZXI7Ij48b2JqZWN0IHdpZHRoPSI0MzIiIGhlaWdodD0iMjY4Ij48cGFyYW0gbmFtZT0ibW92aWUiIHZhbHVlPSJodHRwOi8vd3d3LnlvdXR1YmUuY29tL3YvdzBndFdha1BJTEkmYXA9JTI1MjZmbXQlM0QxOCI+PC9wYXJhbT48cGFyYW0gbmFtZT0id21vZGUiIHZhbHVlPSJvcGFxdWUiPjwvcGFyYW0+PGVtYmVkIHNyYz0iaHR0cDovL3d3dy55b3V0dWJlLmNvbS92L3cwZ3RXYWtQSUxJJmFwPSUyNTI2Zm10JTNEMTgiIHR5cGU9ImFwcGxpY2F0aW9uL3gtc2hvY2t3YXZlLWZsYXNoIiB3bW9kZT0ib3BhcXVlIiB3aWR0aD0iNDMyIiBoZWlnaHQ9IjI2OCIgYWxsb3dmdWxsc2NyZWVuPSJ0cnVlIj48L2VtYmVkPjwvb2JqZWN0PjwvZGl2PjxkaXYgc3R5bGU9InRleHQtYWxpZ246IGNlbnRlcjsiPjxvYmplY3Qgd2lkdGg9IjQzMiIgaGVpZ2h0PSIyNjgiPjxwYXJhbSBuYW1lPSJtb3ZpZSIgdmFsdWU9Imh0dHA6Ly93d3cueW91dHViZS5jb20vdi9aV001X2hLRzcxcyZhcD0lMjUyNmZtdCUzRDE4Ij48L3BhcmFtPjxwYXJhbSBuYW1lPSJ3bW9kZSIgdmFsdWU9Im9wYXF1ZSI+PC9wYXJhbT48ZW1iZWQgc3JjPSJodHRwOi8vd3d3LnlvdXR1YmUuY29tL3YvWldNNV9oS0c3MXMmYXA9JTI1MjZmbXQlM0QxOCIgdHlwZT0iYXBwbGljYXRpb24veC1zaG9ja3dhdmUtZmxhc2giIHdtb2RlPSJvcGFxdWUiIHdpZHRoPSI0MzIiIGhlaWdodD0iMjY4IiBhbGxvd2Z1bGxzY3JlZW49InRydWUiPjwvZW1iZWQ+PC9vYmplY3Q+PC9kaXY+PGRpdiBzdHlsZT0idGV4dC1hbGlnbjogY2VudGVyOyI+PG9iamVjdCB3aWR0aD0iNDMyIiBoZWlnaHQ9IjI2OCI+PHBhcmFtIG5hbWU9Im1vdmllIiB2YWx1ZT0iaHR0cDovL3d3dy55b3V0dWJlLmNvbS92L1Vqd2lHVlQ3UjVZJmFwPSUyNTI2Zm10JTNEMTgiPjwvcGFyYW0+PHBhcmFtIG5hbWU9Indtb2RlIiB2YWx1ZT0ib3BhcXVlIj48L3BhcmFtPjxlbWJlZCBzcmM9Imh0dHA6Ly93d3cueW91dHViZS5jb20vdi9VandpR1ZUN1I1WSZhcD0lMjUyNmZtdCUzRDE4IiB0eXBlPSJhcHBsaWNhdGlvbi94LXNob2Nrd2F2ZS1mbGFzaCIgd21vZGU9Im9wYXF1ZSIgd2lkdGg9IjQzMiIgaGVpZ2h0PSIyNjgiIGFsbG93ZnVsbHNjcmVlbj0idHJ1ZSI+PC9lbWJlZD48L29iamVjdD48L2Rpdj48L3A+

good for you *backs away slowly*

Excellent, excellent write up on one of my favorite film composers.

I was surprised with Angels & Demons, considering the general consensus that seems to be it's just more of the same. He took a theme from Da Vinci and basically built an entire score around it, and it works quite well with the film and by itself.

Still, Black Hawk Down (the expanded bootleg, not the ridiculously short retail release) will always be my favorite. "He's Dead & Cover Fire" is seven and a half minutes of the best music he's ever done.

WanderFreak:
Excellent, excellent write up on one of my favorite film composers.

I was surprised with Angels & Demons, considering the general consensus that seems to be it's just more of the same. He took a theme from Da Vinci and basically built an entire score around it, and it works quite well with the film and by itself.

Still, Black Hawk Down (the expanded bootleg, not the ridiculously short retail release) will always be my favorite. "He's Dead & Cover Fire" is seven and a half minutes of the best music he's ever done.

Oh, god yes. "Missing - Synchrotone", "Barra Barra", "Leave No Man Behind" and "Nobody Asks to Be a Hero" are also great pieces from that complete score.

EDIT: I've made a vast number of amendments to typos and formatting quirks. Hopefully, it's easier to read now.