So, I skipped trial 2 and am now ready to proceed to 3. The smell of the peanut butter easily overpowers the once powerful mint. But enough of the chit-chat (type-type?), it's time to chow... 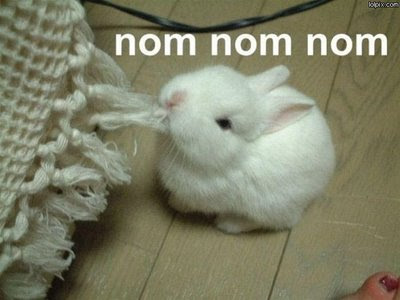 I hope this makes up for the giraffe.

Much better! I am pleased to announce that, while mint jam doesn't hold up well on its own, it compliments peanut butter nicely; the mint and peanut flavours perform a wonderful ballet rather than an inexperience grind on the dance floor of the mouth (too much?). Finishing the sammich was a treat.

Now for the fourth and final step[2]: A Hazlenut/Mint sammich!

Since I promised not to write any more pretentio-speak, I am going to write up a Coles Notes[3] description of the sammich creation:

I grabbed two more slices of bread from the loaf and placed them on the plate.
I began pulling the knife from the PB tub but I fumbled it and got peanut butter on my white "Molson Canadian" shirt.
I hope peanut butter comes out in the wash.
I clean the knife.
I open the tub of brand name hazlenut spread.
I grab a glob and spread it on the slice.
I grab a glob of jelly and spread it on the other slice (no hassle, thankfully).
I form a sammich.

Well, I hope that you have enjoyed this so far (I forgive you TL;DRs out there, this was a bit lengthy) because we are about to take on:

I hope I made a choice that we can all agree on; something that isn't overplayed but still recognizable as awesome.

I forcefully grab the wild sammich and attempt to stare it down. Much to my surprise, I feel it staring back at me, peering into my very soul. I know this is impossible, but...

no, no, no! I promised. No more faux Ivy-League pretentiousness. And no Kevin Costner speeches, let's just go.

To quote Seth Rogen from Pineapple Express: "I made a mistake." This is horrid! Mint and hazlenut do not good bedfellows make. I admit to putting way too much jelly on the sammich though, that is what I assume to be the problem. BLEH! I don't think I'm gonna need to take a swig of the emergency fruit punch just yet but I certainly will after the sammich is completely devoured. Ugh, let's get this over with... 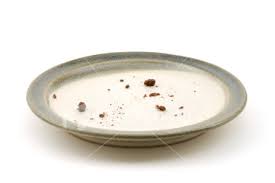 Hey, does this mean I defeated the boss with low HP, or did the boss win? Or, did I defeat the boss and the game, but got the bad ending instead of the good one? Help, my analogy is biting me in the buttocks!

Recommendation: With moderation and a powerful dance partner, mint jelly has the power to surprise. But alone or with a weaker dance partner, it can destroy your sandwich and ruin your t-shirt. I'll recommend the more adventurous of you to try it out but to the general public I say:

Final thoughts: Nothing really. I hope you leave a comment or two and I welcome all criticism, constructive or otherwise. Any tips on how I can improve my style will be greatly appreciated. Thank you all and if I don't see you again, good afternoon, good evening, and goodnight!

[1] Spoiler Alert: All figures in metric because I don't know how big a "fluid ounce" is.
[2] I don't want to toast anything up. For those of you who want to know what mint jelly on toast tastes like, make it your damn self.
[3] Or CliffsNotes for Americans. I apologize for not knowing the equivalent for other countries.
Ren3004
2   POSTED: 3 Jun 2010 16:03

I had never heard of mint jelly before. What will they come up with next!?

Oh, and congratulations on your 5K.

Thanks. It's always good to know that kind of stuff (girls dig guys who know what you can and can't get out of your shirt).

Not such a great product.

I personally think mint is something (along with tomatoes and carrots) that tastes best when raw and unsullied by human culinary preparation. Hence, I don't eat mint sauce with lamb, I don't like Polos, and I think that the weird mint cordial that French people drink is absolutely vile.

As for the review style, I give you a Youtube-esque "Thumbs up". I also wish you the best of luck in making that small green bar into a bigger bar than the small red bar.

Calumon: Maybe we can buy some...

Jack: Not in a million years.

Mint Jelly is traditionally served with lamb. I've never had it, but it's supposedly good. Might make a good sauce for it.

... I see no point in mint jam... If you're having roast lamb you use mint sauce, if it's bread or toast you use a fruit based jam or marmalade.

It's probably my favorite one he ever made, other than his cigar related ones, those were good too.

Alright, for being a fan of Mark Twain, I will have to go on and actually read your post...

Or... placed on a sandwich with normally overpowering cheese.

I bet it would freak somone out on shrooms, "Why teh FUCK do I taste mint!? WWWYAYAYAYYWHARG!"

I've never heard of mint jelly though, I'll have to work two street corners this weekend to pay for it!

I love mint! I would probably just spoon straight out of the jar..... OR just find something that the flavor of mint can go with, that would ba a cooking challange.

...Irresistible urge to run out and find some. I must try this, regardless of how it tastes.

Interesting review. I enjoy your style. As for the product, I don't really plan on trying it, but it looks really cool in that jar in the first pic.

I hate mint flavoured things almost with a passion due to needing far too much peppermint flavoured Gaviscon (heartburn remedy) when pregnant. So thanks for the that, now I need never lie awake thinking my hatred is holding me back from a wonderful experience + we don't get it in the UK (thankfully) ;-) Funny review though, dude!

So do I! How would that work? Would Mama be a playable class? And would everyone share recipes after the battle?

Tharwen:
Great review, great soundtrack. As for the review style, I give you a Youtube-esque "Thumbs up".

Thanks guys. Really appreciate it. I'm glad I was able to entertain you.

Mint jelly is suppose to go with Lamb, they do taste really good together. I wouldn't be surprised if that's the only thing Mint Jelly is made for. My English grandfather wont even think about Lamb without a jar of Mint Jelly at the ready

So do I! How would that work? Would Mama be a playable class? And would everyone share recipes after the battle?

Mama would be the endgame boss, like GLaDOS in Portal, and the recipes are goals that your team needs to complete in order to win! ^_^

Critical question: what brand of peanutbutter did you use?

Oh, and the review was hilarious.

Thanks. It's always good to know that kind of stuff (girls dig guys who know what you can and can't get out of your shirt).

Hey, I forgot to tell you, peanut butter *does* come out in the wash.

That would be Nutella (TM).

That would be Nutella (TM).

Sounds kinda tasty, but alas, I think I'll pass on this one if you don't mind. No hard feelings =D