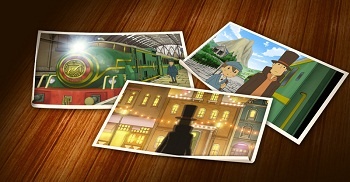 Whatever the next game will be from Professor Layton studio Level 5, there's a high chance it'll be on Nintendo's upcoming 3DS.

In an interview with Japanese game uber-mag Famitsu, Layton series producer Akihiro Hino dropped some hints as to what his studio's next project would be. He revealed that the game would be a collaboration with director Jiro Ishi, called Time Travelers - but that wasn't the interesting part.

What's interesting is the level of secrecy that the duo took pains to maintain around the title. Ishi - who directed critically-acclaimed PS3/PSP/Wii adventure game 428 - refused to even shed some light on what genre of game it was.

Whatever the genre, though, it seems that the title will probably be for Nintendo's recently-announced new handheld platform, the 3DS. That would be the most likely interpretation of Hino's cryptic statement that Time Travelers was being made "for hardware that doesn't exist yet."

Either that, or they'll be making it for, like, the PS4 or something.

Ishi did say that he thought his idea for Time Travelers would be a completely original take on the idea of time travel. "...I have an idea about time travel that has never been done before, even in movies or books."

But has it been done in games before, Ishi-san? Chrono Trigger came out in the early 90s, man!