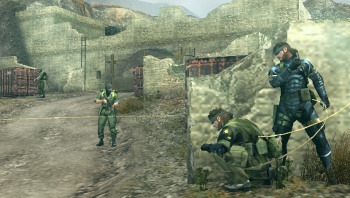 In order to meet Japan's "C" rating for gamers age 15 or older, Metal Gear Solid Peace Walker had to have a scene removed, and Hideo Kojima is none too happy.

Kojima Tweeted that in order to meet Japan's teen rating, "a certain scene" Kojima feels is both a "standard element" and "absolutely necessary for MGS" was removed. Had that scene not been cut, the game would have garnered a "D" rating, restricting it to gamers who are 17 or older.

While Kojima was not forthcoming on the actual nature of the deleted scene, he is inviting gamers to compare the Japanese version with the American or European release, neither of which were altered. Kojima further voiced concern over the reason Peace Walker was edited.

"There's tolerance for fantasy games, but for games where you show war or real violence between people, you apparently can't complain about anything. With this, it seems impossible to communicate something through games," Kojima said.

The unedited American release of Metal Gear Solid Peace Walker will receive a "T" rating. It is slated for a June 8 release, and will be for the PSP.

Regretting Our Words and Deeds The Wooster 30 Comments
Comments on