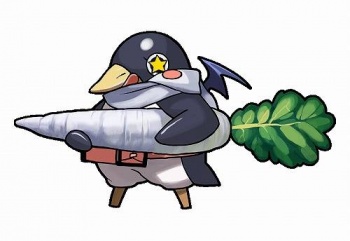 An somewhat obscure title has received a very cheap piece of DLC in the form of a dangerous vegetable.

Japanese players of PSP game Prinny 2 Tokkou Yuugi! Akatsuki no Pantsu Daisakusenssu! (which translates to something like Prinny 2: Dawn of the Great Pants War) are now able to download the cheapest piece of DLC known to man (other than one that is free). For the low, low price of around 10 cents, Prinny can be equipped with a "Demon World Radish" that takes the place of its weapon throughout the game.

Developer Nippon Ichi is selling the radish for a mere 10 yen, which is apparently the cheapest a piece of DLC can be sold for on the PlayStation Network. Not only is this piece of DLC cheap, but it's absolutely ridiculous. Still, it makes perfect sense within the world of Prinny. The Demon World Radish is not a weapon to be trifled with.

The Prinny character received its own side-scrolling platform/action game after making a first appearance in the Disgaea tactical-RPG series. A Prinny is a penguin with a bomb strapped to it, which makes it one of the most lethal penguins on Earth, possibly only second to the Batman villain if he's got all those cool umbrellas with him. The original Prinny side-scroller, Prinny: Can I Really Be the Hero?, made its way out of Japan and was known for its difficulty, but also for giving players 1,000 lives.

You've got to wonder why Nippon Ichi is putting a price tag on this DLC at all, as it can't be making much money from it. Maybe it's a publicity stunt, as a 10 cent price may get it more press than to release it for free. I mean, I'm writing about it, and I'm pretty important in the grand scheme of things, so it must have worked. When compared to other recent DLC offerings from larger videogame companies that have a suspect value, this deadly radish is definitely the bee's knees.