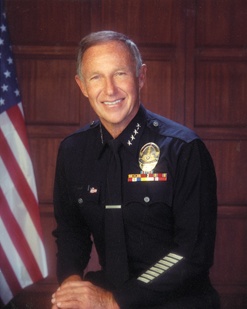 Former Los Angeles Chief of Police Daryl F. Gates, better known to gamers for his work on the Police Quest and SWAT games, has passed away.

Gates joined the LAPD in 1949, beginning a long and distinguished career that culminated in his appointment as chief of the department in 1978. Along the way he oversaw the investigations of the Manson Family murders and the Hillside Strangler case, and was also instrumental in the formation of the very first SWAT team, a model which was soon copied by police forces around the world. But he came under fire for his handling of the 1991 beating of Rodney King and the riots that followed the acquittal of the officers involved in 1992; the intense criticism finally led to his resignation in June of that year.

Why is this of interest? Because after leaving the LAPD, Gates signed up with Sierra to work on Police Quest: Open Season, the fourth game in the famed Police Quest series, and then Police Quest: SWAT, which saw the series shift from the traditional adventure genre to a more action-oriented FMV format. The game flopped but the franchise bounced back three years later with SWAT 2, the last game to carry the Police Quest title; Gates served as a consultant on that game as well as the follow-up SWAT 3: Closer Quarters Battle.

The 83-year-old Gates died of cancer at his home in Newport Beach, California.

Women at the Pinnacle justinmcelroy 0 Comments