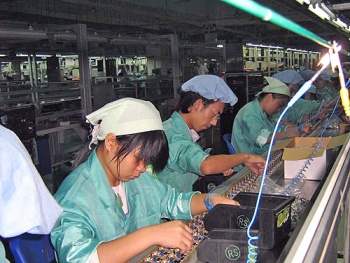 Microsoft is mobilizing its inspectors after the National Labor Committee's allegations of atrocious conditions at KYE, a Chinese factory that makes products for Microsoft.

The report, which was made publicly available on the National Labor Committee's site, goes into explicit detail on the conditions of the factory. KYE, which supplies products not only to Microsoft but a number of other American companies, employs workers dubbed as "work study students" sometimes as young as 14. The report states they are working 15 hour shifts, six or seven days a week. Workers are paid 65 cents an hour (about 4 Chinese Yuan an hour, the Yuan being the rough equivalent to a US dollar in terms of Chinese currency), with factory food being deducted from the wage. The report further cites cramped fourteen-person dormitories, no proper bathing facilities, and sexual harassment of female employees by the guards.

"As a result of this report, we have a team of independent auditors en route to the facility to conduct a complete and thorough investigation," Microsoft said in response to this report. "If we find that the factory is not adhering to our standards, we will take appropriate action."

Microsoft said it had earlier assessed the facility and found no evidence of either child labor or safety violation. It has, however, stated it is going to take these new allegations seriously and respond. Microsoft has promised the facility will be audited next week in order to ensure the workers are being properly treated. Of course, with the official announcement and set date, there's nothing preventing the factory management from taking some time to "clean house" and make it look good for the visiting American inspectors. The dichotomy between the Microsoft assessment and the report is striking, and Chinese factory owners have been known for putting on a good face to American companies in the past to mask labor violations. While Microsoft has declared its intent to correct any problems it may find, who is to say it will find any problems when its inspectors go through the facility?