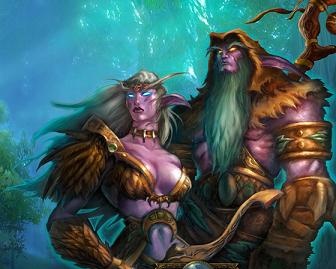 A rare disease might challenge all that we thought we knew about elves.

In classic fantasy writing, elves are normally a race that despise all others. They will cloister themselves away in a hidden mystical vale, only to emerge when absolutely necessary or when shown that dwarves and humans have some redeeming value by chance. According to a newly published study, those afflicted with Williams Disease are given "elfin" facial features, but none of the racial hatred typically exhibited by elves.

Williams Disease, along with elfin facial features, is characterized by "mild to moderate mental retardation" and a complete lack of "racial stereotyping." This group is the only one currently known to not exhibit these racial fears, and is also socially fearless. Not to diminish those affected by Williams Disease, but this new study could have sweeping consequences on the belief system of nerds.

Elves hate everyone, and must have their tough exteriors broken down over time: this is the way it's always been. However, in the study, children with WS showed no bias towards their own race, though gender bias was still evident. In fact, those affected by WS are considered "hyper-sociable," which is much different from elves as we know them.

Has classic fantasy gotten it all wrong? Are elves actually incredibly friendly in real life? According to science, yes. On the other hand, this article could be the insensitive ramblings of a madman.

Trailers: Lord Of The Rings: The War in the North - Elf Combat Trailer Team Hollywood 10 Comments