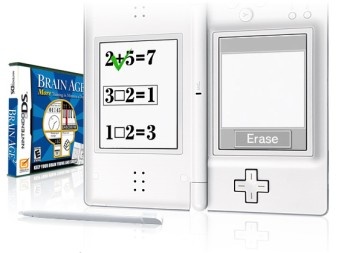 Bad news for all you people counting on "brain training" videogames to make you smarter: They won't.

I'll be the first to admit it: I'm not a very smart guy. Fortunately, I realized that I could finally put my love of videogames to good use and rectify that situation by spending time playing one of the many "brain training" games currently on the market. Ah, but I'll be the first to admit something else: I'm also kind of a lazy bugger, so I never bothered. Turns out that was the right move all along.

A study in the U.K. had more than 11,000 people play brain training games over a six week period and then compared them to a control group that spent the same amount of time just screwing around on the internet. The shocking result? On a "range of tests," those with trained brains performed no better than the internet goof-offs.

"The results are clear," said Dr Adrian Owen, assistant director of Medical Research Council's Cognition and Brain Sciences Unit in Cambridge. "Statistically, there are no significant differences between the improvements seen in participants who played our brain training games, and those who just went on the internet for the same length of time."

Those who played the games did get better at them, but the improvement was strictly a matter of practice; spend six weeks playing Halo 3 and you'll get better at that, too, but it doesn't mean your IQ has suddenly jumped 20 points. "The holy grail of brain training is that it has some genuine effect on mental ability or intelligence and what we showed was that was categorically not the case," Owen added.

There is still some potential benefit, however: While the study concluded that these games don't enhance brain power, the question of whether or not they can help slow the decline of mental skills commonly associated with aging remains unanswered. So keep at it, dad!