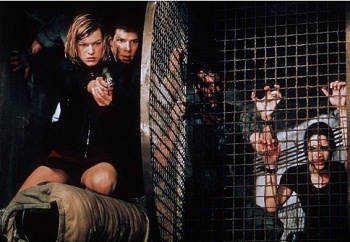 Resident Evil movie director Paul W.S. Anderson wants to unite the creation of movies and games, and not in the cheap knockoff sense, either.

Videogame movies are tricky, and nobody should know better than Anderson. His first major foray into the videogame movie world, Resident Evil, was not particularly well-received by fans and critics alike. Still, he says, he loves games, and is returning to make Resident Evil: Afterlife, having left the series after the first theatrical release. Although Anderson is planning to direct a number of game movies such as Castlevania and Driver, what he really wants to do is unite the creation of movies and games, creating them both at the same time.

"In the future I want to be developing intellectual properties that will occupy both spaces simultaneously...I've been actively involved in the gaming world for 15 years now, talking to developers ever since Mortal Kombat, so I think I have a very good appreciation for what their needs and what their concerns are," Anderson said. "I think I really do know how to join the two medias together in a successful way, and that's what I'll be working on in the next few years."

Anderson said he intends to kick off his project with the release of Buck Rogers, a late 1920's sci-fi comic that saw a number of television and theatrical releases over the years, the most recent being in 1981.

"Buck Rogers is something that's starting from ground zero right now, so that's definitely something that I would be considering doing. Really my approach to bridging the two medias is from Buck onwards," Anderson said.

Making a game and making a movie are two entirely different beasts, but uniting the development could at least bring both to equal levels of polish.

Previews: The Evil Within is "Pure Survival Horror" Encaen 0 Comments