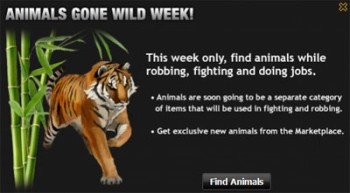 People for the Ethical Treatment of Animals has appealed to Zynga founder Mark Pincus' love of his late bulldog and asked him to rethink the plan to add animals like pit bulls and tigers to the popular Facebook game Mafia Wars.

Zynga revealed earlier this week that animals like lions, tigers and pit bulls will be coming to Mafia Wars next week. The beasts will be included in their own "combat item class," with existing animals moved to that category, and will be available for use in "fights and robbing." It seems perfectly reasonable to me; after all, no stroll through the hood is complete without some blinged-up dumbass trying to impress the world with his ownership of a vicious dog he can barely keep under control. (Not sure how the lions and tigers fit in, though.) But PETA is a little less fond of the idea.

"'Bully breeds' like your beloved late American bulldog, Zinga, are also the breeds of choice for dogfighters and thugs who want a 'macho' animal to intimidate others, guard their property, or make them money by winning fights," the group said in a letter to Pincus. "Every day, PETA staffers meet dogs who have been trapped for years at the end of heavy tractor-trailer chains with nothing but bare patches of dirt and plastic barrels for shelter."

"These dogs are usually full of heartworms, emaciated, and scarred all over," it continued. "They are often physically abused and starved, sometimes to death, for losing in illegal dogfights or for being 'bad guards' or 'not mean enough.' The people who acquire them do so because they have been taught that having one of these dogs is 'cool' and 'tough,' but they have no idea about the care and feelings of the animal they have enslaved."

PETA seems to be gambling that memories of Pincus' "beloved" dog will tug at his heartstrings enough to make him change his mind. It probably won't work, but it's a smart shot to take: When Pincus founded the company in 2007, he named it after his dog, Zinga.