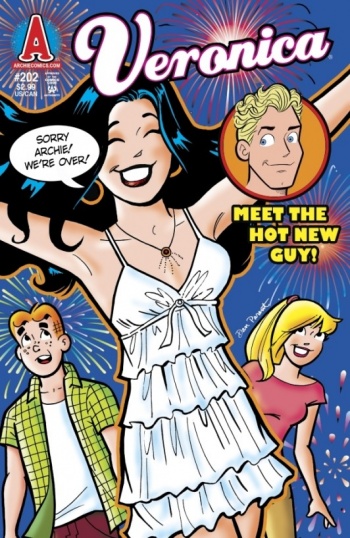 The world of Archie Comics is set to introduce an openly gay character for the first time.

For the past 70 years, the wide variety of books known as Archie Comics have not once featured an openly gay character. This is about to change come September, as Archie Comics has announced it will be introducing its first in issue #202 of Veronica.

Archie Comics is a kid-friendly series that focuses on lovable redhead teenager Archie Andrews and his escapades while attending Riverdale High. Other main characters include jock Reggie, love interests Betty and Veronica (creating a hilarity-inducing love triangle), and burger fanatic Jughead. If you haven't read Archie Comics sometime in your life, you're either a robot or were raised by beavers.

The new openly gay character, Kevin Keller, will be introduced in a storyline called "Isn't it Bromantic?" Kevin first impresses Veronica by beating Jughead in a burger eating contest. Veronica ends up dumping Archie for the new blonde super hunk, only to find out that her milkshake doesn't bring Kevin to the yard. As Veronica desperately attempts to date a man without a firecrotch, Kevin is forced to let her down easy.

The introduction of Kevin is about "keeping the world of Archie Comics current and inclusive," says Archie Comics Co-CEO Jon Goldwater. "Archie's hometown of Riverdale has always been a safe world for everyone. It just makes sense to have an openly gay character in Archie comic books."

Am I the only one up in arms about this new character? Archie Comics is really overstepping its bounds here, if I may be so bold. Do they seriously expect us to believe anyone could beat Jughead in a burger eating contest? Jughead Jones eats a stack of five burgers at once as a snack on a slow day, and some prettyboy out-of-towner is supposed to be able to defeat him just like that? I think not, Archie Comics, I think not. It's pretty forward thinking of them to introduce an openly gay character, though.