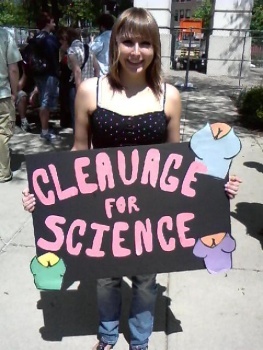 Today is the day for Boobquake, an effort by women around the world to bring about the apocalyptic end of life as we know it with the magical power of their boobs - or, conversely, to make Iranian cleric Hojatoleslam Kazem Sedighi look like one.

Sedighi, a "senior Iranian cleric," said last week that immodest women were to blame for the increase of devastating earthquakes around the world. "Many women who do not dress modestly... lead young men astray, corrupt their chastity and spread adultery in society, which increases earthquakes," he claimed. "What can we do to avoid being buried under the rubble? There is no other solution but to take refuge in religion and to adapt our lives to Islam's moral codes."

Despite Sedighi's iron-clad logic, one woman has chosen to tempt fate: Jennifer McCreight, who launched a "Boobquake" Facebook page in order to encourage the world's floozies, hoochies and other women of low moral fiber to show off their cleavage in hopes of sparking the Boobquake. Women who feel their greatest assets are located elsewhere on their bodies are invited to wear skimpy shorts instead.

And don't get the idea that this is just some kind of funny Facebook stunt meant to make some Iranian wacko look like a nutjob, either: This is serious science! "I fully plan on doing some statistics after the event," McCreight wrote on the Boobquake page. "I know many earthquakes happen on a daily basis, so we're looking to see if Boobquake significantly increases the number or severity of earthquakes. Or if an earthquake strikes West Lafayette, IN and only kills me, that may be good evidence of God's wrath as well." If it's decided in peer review that a larger sample size is required for scientific validity, she added, she may also factor Mardi Gras into her calculations.

Boobquake is scheduled to take place today, April 26, and thus far more than 200,000 people have signed up as "confirmed guests" for the event. You ladies out there who might feel that this event is inappropriate or embarrassing somehow, bear in mind that this is for science, and the advancement of academia is never something to be ashamed of. So step up and do your part!

Of course, should Boobquake fail to launch the apocalyptic tremors predicted by Sedighi, McCreight expressed confidence that he'll have a perfectly rational explanation for why civilization failed to end, which may or may not include a discussion of plate tectonics.