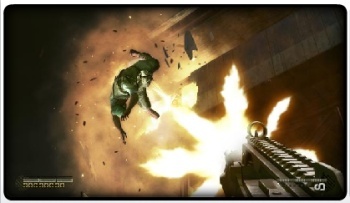 Bodycount Creative Director Stuart Black has a refreshing approach toward realism videogames that can be perfectly summed up in two simple words: "Fuck realism."

Truth be told, Black's attitude isn't all that unusual. After all, no matter how "realistic" videogames become, certain concessions have to be made for the fact that you're sitting on your couch. And hardcore simulators aside, videogames are meant to be fun and not actual terror-filled brushes with death. Still, there aren't many industry figures who are quite so up-front about their feelings regarding realism than Black, an industry veteran who spent time at studios including Bullfrog and Criterion before coming to Codemasters.

"If realism doesn't help the game, fuck it, throw it away," he said in an interview with The Guardian.

Black said Codemasters, where Bodycount is being developed, is a good fit for him because of its attitude that fun should trump everything else. "I've known Codemasters all my gaming life, but I'd never thought about working for them," he continued. "But it came to me through an agency, and I thought, what the hell. And when I went up there - I was just really impressed by the attitude towards development. It felt like, here's a place I can get some creative freedom, some creative control and really develop something I want to develop."

Bodycount is built on a "general sense of escapism," according to Black. "I don't want Bodycount to reflect the reality that I'm in, I've got enough of that around me," he said. "I want to go somewhere else - I want to be lifted up, to forget about my troubles, and escape."

Bodycount is currently in development for the Xbox 360 and PlayStation 3, and is expected to launch in early 2011.