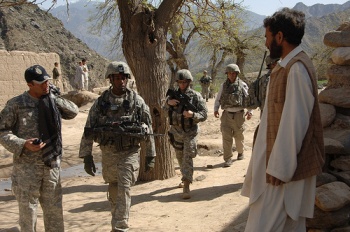 The U.S. Department of Defense wants to make soldiers sweat with games that react to their brainwaves and body patterns.

A current solicitation from the United States Department of Defense is asking for the development of serious games that can train soldiers to do more than kill. Keeping the peace in Iraq and Afghanistan currently requires dealing with the native population on a daily basis, not firing weaponry, and can create tense situations in an unfamiliar place that some soldiers may not be prepared for.

According to the solicitation, the game's trainees "will be able to speak to and interact at any level with indigenous non-player characters (NPC), complete with voice recognition, speech, and facial gestures." The characters would react realistically according to how the soldier treated them. "For example, if a player comes in and insults the local tribal leader the game scenario will change and the trainee will find that future interactions with the local population are more difficult and more hostile." Sounds just like Peter Molyneux's Milo to me.

The game would be designed to put a large amount of pressure on soldiers and react to their eye movements, voice patterns, and heart rates: "The trainee will be monitored for neural/physiological markers (e.g. EEG, eye tracking, pupil diameter, heart rate, respiration, and so forth) of workload and the game will adjust in difficulty based in part on these neural/physiological metrics; this is designed to keep players motivated, interested, and at an optimal learning level." Ideally, the game would present various kinds of situations to different ranks of soldiers depending on those that they would actually encounter. Up to four soldiers would be able to enter the simulation at once.

I can't even talk to the barista at Starbucks without freezing up, so a game like this could have uses for far more important tasks than making peace. It could also teach me what to say when asked if I want whipped cream on my latte or not: a decision with sweeping universal consequences. To be honest, a realistic version of the DoD's game sounds incredibly advanced and beyond capability, but then again, first-person shooters don't exactly train soldiers how to fire a gun, but could give somewhat of a baseline skill to work with. The peacekeeping game described here wouldn't have to be totally realistic to get soldiers used to tough situations, or to help me with my coffee.

e3 2014: nDreams Shows the Secret Cult of The Assembly On Oculus Encaen 0 Comments