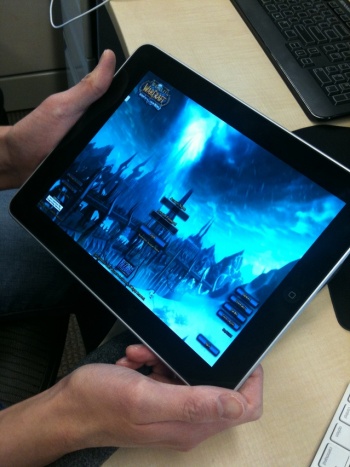 The iPad may not be able to run Flash games, but it can run World of Warcraft - as long as you're using cloud gaming service Gaikai, anyway.

Part of the appeal of server-side gaming services like Gaikai is that it theoretically lets you play even graphically demanding games on whatever device you want, as long as the device is connected to the internet and can play streaming video. This, by the way, includes Apple's iPad tablet.

The image you see here was posted on the personal blog of David "Chesty McShirt" Perry, demonstrating on just how many different devices he and the Gaikai team had been testing their service. I don't know how you'd play World of Warcraft on the iPad, but the game runs - or the login screen runs, anyway. Let's see how it handles Dalaran at peak hours or fighting Heroic-mode Professor Putricide before we start crowing our triumphs, eh?

In all seriousness, the fact that Gaikai works on the iPad is actually very interesting. Apple's notorious closed system means that only games built from the ground up for the iPad (or its iPhone and iPod Touch brethren) are playable; services like Gaikai could almost completely circumvent that.

For that matter, Gaikai could be a huge blessing for Mac gamers who, up until now, have had to either deal with the meager games that developers see fit to port to the Mac (though considering that the list includes Blizzard and now Valve, you could do a lot worse), or boot up in Windows just to get their fix. Clearly, Gaikai works on Apple platforms, so this means that Mac owners can theoretically play any PC game, whether it's developed for their OS or not.

Come on - isn't Mass Effect 2 worth a little bit of input lag?