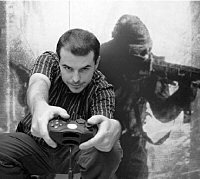 Some people quit their jobs by telling the boss to take the job give it to someone else. Clint Hocking does it by nearly making everyone cry.

Ubisoft's Clint Hocking, both designer and creative director on the Splinter Cell series and recently creative director for Far Cry 2, has publicly announced his resignation from the company. Though it may be surprising considering his extremely positive track record, a revealing blog post explains his reasoning, and is a must-read for anyone interested in the life of a videogame industry employee.

Hocking composed the post to explain himself, but held within his prose are inspiring words of advice. He got his start tinkering with the Unreal Editor, and applied to Ubisoft when they needed people with UE experience. Hocking landed a position as a designer on the very first Splinter Cell, and moved higher on the ladder through successive games in the series. It might seem like he was lucky, but he thinks the "mystery ingredient was courage."

Having the courage to admit his life was unsustainable, and to try to acknowledge this and try to fix it was key. He seems to feel, though, that the unsustainable life has crept up again. He writes:

In the 451 weeks that I have been here, I have adopted many new habits. It has taken tremendous effort to prevent those habits from atrophying into bad ones. Pride burns into hubris. Willingness wilts into desperation. Confidence slows to stubbornness. Passion boils into anger. Each of these faults and others - without care and constant self-examination - risk becoming habits.

I am too comfortable. I am too content. And I know where that can lead for me.

And he believes his future requires taking new chances, and having courage again:

Fortunately, for the first time in my life, I know the way forward. The way forward lies in my having the courage that I did not know I had a decade ago to bid farewell to those tragically comforting habits. I need to walk on hot coals and sleep on a bed of nails. I need to chew on broken glass. I need to drink paint. This post has gotten long enough and I am still afraid to come to the point, but what I really need more than anything is to write these words;

I gave notice of my resignation to Ubisoft on Monday, April 26th, 2010.

So you see kids, even a successful videogame company employee can have stress and internal conflict. It's not all daisies and free pizza. Or, maybe he just got really mad about Ubisoft's new DRM. Hopefully he'll skip the paint drinking part.

Gallery of the Day: 8 Great Ubisoft Games That Prove That They Aren't All That Bad DrStrangelove 20 Comments
Comments on