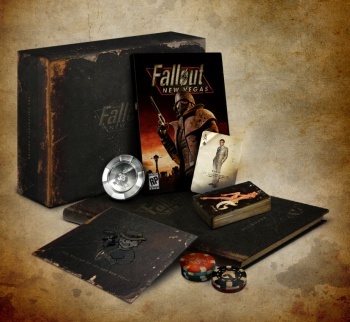 Bethesda Softworks expects the upcoming Fallout: New Vegas to sell even better than the hit Fallout 3 and to help ensure it does, it's taken the wraps off the game's super-cool Collector's Edition.

The Fallout: New Vegas Collector's Edition comes loaded with extras inspired by the post-nuclear version of Sin City that players will encounter in the game. The CE will include "Lucky 7" poker chips modeled after those found in the major casinos along the New Vegas strip, a deck of cards illustrated with New Vegas characters and factions, a "Lucky 38" platinum game chip, a hardcover graphic novel written by Creative Director Chris Avellone called All Roads and of course, the ubiquitous "Making of" DVD. The whole thing comes packed inside a sexy, faux-weather-beaten case.

"We're offering this very cool collector's edition to give fans the opportunity to own some of the items that they'll discover while playing Fallout: New Vegas," said Bethesda marketing man Pete Hines. "We are also expanding their experience with the game by including a top-notch graphic novel worthy of the Fallout name and a DVD that gives them a behind-the-scenes look at how the game was created."

Collector's Editions aren't quite the rarity they once were but even so, the New Vegas CE looks like a standout. It'll need to be: Hines also predicted that the new game will outsell the multi-million-selling hit Fallout 3. "Based on what we're seeing so far from the response at retail and from gamers, we expect New Vegas to do even better than Fallout 3," he told MCV. "We'll have to wait and see just how much better."

Fallout: New Vegas is expected to be released near the end of 2010 for the PC, Xbox 360 and PlayStation 3.