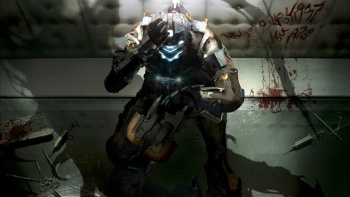 Steve Papoutsis of Visceral Games says Isaac Clarke will do a little talking in Dead Space 2 because it's only natural that he'd have a few things to say about all the "gnarly sh*t" he went through in the first game.

Dead Space was a tricky game to pigeonhole. There was an awful lot of shooting for a survival horror game, but it never crossed the line and turned into an actual shooter; the story, meanwhile, was a major part of the experience, yet the central character, Isaac Clarke, was a silent protagonist who spent the entire game (except for the end bit!) behind his anonymizing engineer's mask. It was a reasonably successful game if not exactly a runaway hit, but Papoutsis, who served as a senior producer on Dead Space, said that while Visceral plans on mixing things up a bit, the "atmosphere and tension" of the original will remain intact.

"A lot of people say that the first game was a horror-action shooter, and when we've spoken about action this time around, I think some people are taking that out of context," he told VG247. "What I really want to be extremely clear about with everybody is that Dead Space 2 is a not a run-and-gun game, we're not turning it into that. You're gonna have to conserve ammo, you're gonna have to be cautious, you're going to have to look and listen in the environment in order to succeed."

"There are moments where the pace will change and that's important for any horror game," he continued. "You can't just maintain tension all the way throughout the game, because what happens is people get desensitized and then they're not scared. So you have to change the pace of the game to really set people up for scares and that's what we're really focused on doing."

Part of the effort to maintain the Dead Space ambiance and draw players deeper into the game can be seen in the decision to make Isaac a more active participant in the proceedings. "He's not gonna be busting off a bunch of corny one-liners or anything like that," Papoutsis explained. "We're not making him a 'Chatty Cathy,' it's just that we're giving him a voice so he can make some observations and speak to people from time to time."

"He went through some gnarly shit and he never said anything, so, we thought it's be silly if he never said a word in Dead Space 2," he added. "I mean, he's gotta have something to say about what happened."

Dead Space 2 is currently slated for release in early 2011.