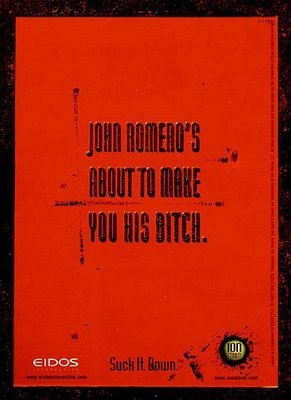 In discussing the failure of 2000's much-hyped Daikatana, creator John Romero has officially apologized for the "make you his bitch" ad campaign.

I'm going to quote our very own Shamus Young here for a moment: For almost a decade, Ion Storm's Daikatana has been the example of "industry waste, arrogance, and incompetence, as well as a universal punchline for things that suck." The shooter was supposed to be an epic vision, the masterpiece of John Romero - the mastermind behind genre-defining Doom and Quake.

Then it came out in May of 2000, and it sucked. The arrogance and hubris that crippled Daikatana have been well chronicled over the years, but none of it is quite as infamous as the ad you see here to the right: "John Romero's About to Make You His Bitch. Suck it Down." It was a pretty ballsy statement in itself, but after the game's failure simply became laughable.

It was also a sentiment that Romero regrets ever becoming attached to his name. In an absolutely fantastic interview with GameSauce, Romero discussed the failure of Daikatana and the infamous "Bitch" ad:

"You know, I never wanted to make you my bitch, not you, not them, not any of the other players and, mosy importantly, not any of my fans," said Romero. "Up until that ad, I felt I had a great relationship with the gamer and the game development community and that ad changed everything ... I regret it and I apologize for it."

"I knew it was risky, and I didn't want to do it. It didn't make sense. I mean, there's the whole culture of smack talk that goes with games and especially the FPS's, and that was something I was known for."

The development of Daikatana was troubled, he said. "It's a miracle the game was even released. Everything was going wrong," and the arrogant advertising only exacerbated the problem. "The ad insulted nearly everyone who read it. It was a terrible marketing decision. I apologize for letting it loose in the first place. I should have stopped it ... While the game could have been better on a number of levels, that ad and the hype that preceded and followed it was clearly a marketing failure."

Are you getting the sense that Romero really wants to take it all back? Good, you're not the only one. Still, the catastrophic failure of Daikatana aside, Romero remains proud of the team he had at Ion Storm and their work on projects like Deus Ex.

As for the continued laughing-stock status of Daikatana? "I'm resigned to it," said Romero. "There is no use in challenging and fighting everyone that puts the game down. I mean, it's only one of my games. I've made several games after Daikatana and a bunch before. So, it really doesn't hurt anymore when I read negative comments about the game - but sure, it did."

It's okay, John. We forgive you.