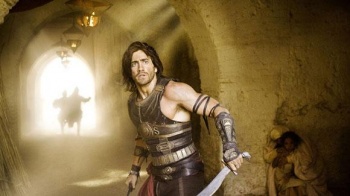 Prince of Persia star Jake Gyllenhaal says he'd be "totally into" lending his voice to a future Prince of Persia videogame and that no matter what Roger Ebert says, he thinks games are art, too.

Some movie stars get involved in videogame tie-ins because they're contractually obligated to do so. A gushing Gyllenhaal, on the other hand, sounded more like he was ready to go bang on Bobby Kotick's door and ask for a job.

"Oh yeah. Of course," he replied, when asked if he'd be willing to do some voice acting in a future game. "It would be an honor. If other people in the games industry are anywhere near as cool as [Prince of Persia game creator and movie scriptwriter] Jordan Mechner then without a doubt. In fact, even if they're not. I'd be totally into it."

"Of course, it depends on what it is and what the story is - but if game makers read this, I'm interested," he added. "It's all about the story with me."

Further burnishing his gamer cred, Gyllenhaal waded into the "games as art" debate, giving at least the appearance of someone who's put some thought into the question. "Without a doubt - it is art. This is art, you know?" he said. "Following your creative instinct is art, no doubt. Yeah, there's a big business behind it and that's for sure, but for me, it's an artistic choice."

Well said, Jake. Prince of Persia: The Sands of Time opens in theaters across North America on May 28.