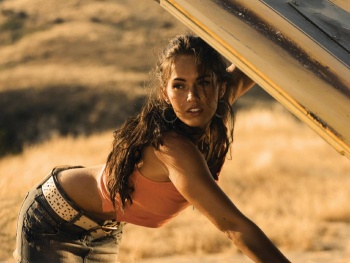 Megan Fox has announced that she will not be appearing in Transformers 3.

Actress Megan Fox, who starred as Mikaela Banes in the first two Transformers movies, will not be returning for the third installment, which starts production this month. Fox's publicist said in a statement: "Megan Fox will not be starring in Transformers 3 ... It was her decision not to return. She wishes the franchise the best."

Fox's departure follows comments made by Fox last year that Michael Bay was difficult to work with, where she compared the director to Napoleon and Hitler. This was followed by an unsigned letter written by three members of the Transformers crew, which accused her of being "dumb", "ungracious", and "unappreciative". Bay stepped up to defend Fox however, saying that he looked forward to working with her in the future.

As yet, Paramount is refusing to give any further details or say who will replace Fox. Transfomers 3 is scheduled for release in July 2011.