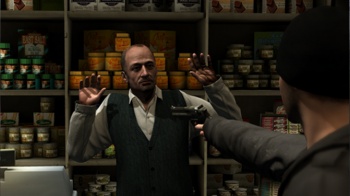 Reports indicate that a deal is very close to being settled that would give the Heavy Rain movie rights to the founders of New Line Cinema.

According to Deadline, an auction set up by Heavy Rain developer Quantic Dream for the film rights to the IP is almost over. Reportedly, the winning party is likely to be Unique Features, the new film company set up by Bob Shaye and Michael Lynne, who founded New Line Cinema back in 1967.

Assuming the deal goes through, does this mean that a Heavy Rain movie could soon be bringing the Origami Killer to a theater near you? Not necessarily - plenty of film rights get sold, but many of them never materialize into full-blown films.

Still, it does mean that - at the very least - some people with the power to make movies happen have been discussing the idea. Somebody had to notice that Heavy Rain has sold more than a million copies worldwide, anyway.

Seeing as how the game itself is basically a movie, that might make it easier to translate into film. Then again, if they don't cast actors who all make Philly sound like it's in the middle of France, can we really say that it's an authentic adaptation?

The Escapist On The Road: PAX East 2013 - Parents as Characters Panel Susan Arendt 5 Comments
Comments on