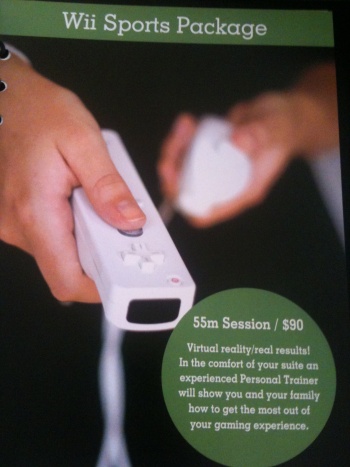 At Trump hotels, a Benjamin can get you a solid hour of some guy showing off the Nintendo Wii.

Current late-night talk show host and co-creator of the Man Show Jimmy Kimmel was surprised by a discovery he made while staying a an unnamed Trump hotel. The hotel was offering a really great, terrible deal of $90 for a so-called "personal trainer" to teach the oblivious or super-rich how to get fit while playing the Nintendo Wii.

Kimmel tweeted a snapshot of proof, saying: "Trump Hotel offers PERSONAL TRAINERS to do WiiFit w/ your kids. I miss PacMan. And sanity." $90 gets customers a 55 minute session of "Virtual reality/real results" where a personal trainer shows "you and your family how to get the most out of your gaming experience."

While Kimmel mentions Wii Fit, the exercise session is called the "Wii Sports Package," so Wii Fit might not even be involved at all. A random dude could just come up to your suite and play Wii Sports tennis against you for 55 minutes, and leave saying "Sucker!" under his breath as he fans himself with his earnings. Assuming a 40 hour workweek, one Wii trainer alone could be pulling in around $14,000 a month just by showing customers how to move their arms in front of a television.

Hotels are known for offering really expensive everything, sometimes charging by the Skittle, but this "personal training" offer is bordering on insane. I get that some people can throw around $90 like it's a can of beans, but those people should at least be smart enough to go buy a Wii for this kind of money. Or, I don't know, just go to a gym?

Via: Tanooki via Kotaku

The Boss Baby - Should've Been Killed in Utero Marter 18 Comments