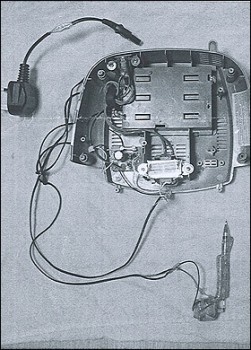 An enterprising prisoner in the U.K. has been busted for offering to ink up his fellow inmates using a tattoo machine he built from a stripped-down PlayStation.

Prison inmates are by necessity a creative bunch, few more so than the detainee at the Brook House Immigration Removal Center who built himself a tattoo machine by tearing down a PlayStation console and then attaching its motor to a sharpened ballpoint pen. "It was a truly bizarre piece of DIY, up there with some of the most extraordinary finds staff have made," a source told The Sun. "When it was switched on it would move up and down like a real tattoo gun."

The source described the device was "a bit Heath Robinson," which according to Wikipedia is Brit-speak for an "unnecessarily complex and implausible contraption," and said that a person would have to be "daring" to use it. But given that inmates routinely smuggle contraband up their asses and drink prison wine that's made in a toilet, getting a tattoo from this thing really doesn't strike me as all that impressive.

Guests of Her Majesty are allowed access PlayStation and PlayStation 2 consoles but not the PlayStation 3 because of its ability to connect to the internet. As for the PlayStation Tattoo Machine, it was seized along with a tattoo magazine but the Border and Immigration Agency said no further action would be taken.