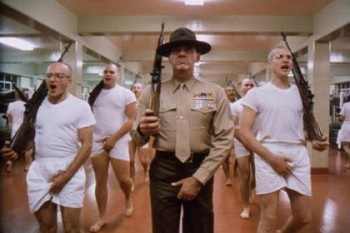 The U.S. Navy is considering the use of videogames like Wii Fit and Dance Dance Revolution to help whip soft, flabby new recruits into some kind of fighting shape.

The military, it goes without saying, is a physically demanding organization. But more than from any previous generation, a lot of new recruits these days just aren't up to it. Their sedentary, Dorito-eating lifestyles have left them ill-equipped to cope with the demands of recruit training, according to a report in the May issue of Navy Times, and the Navy has seen a rising number of injuries at boot camp suffered by recruits who can't handle the amount of "standing and running" involved in training.

The solution? Navy Surgeon General Vice Admiral Adam Robinson thinks it might be found in videogames like Wii Fit and DDR, which could help "newcomers to the military service build up the endurance they need to get in shape safely." The games would be used in addition to the regular training courses, naturally, to help ease soft, squishy recruits to the point at which they could run a mile without busting a gut.

It's far from a done deal at this point, as the Navy is still just "looking into" the idea. Is it a good one? I never had the discipline or moral fiber necessary to even consider a military career so I'm not really in a position to judge, but I have to wonder: What would Gunnery Sergeant Hartman think?

For Science!: 7 Famous Warships That Ruled the Modern Seas Rhykker 42 Comments
Comments on