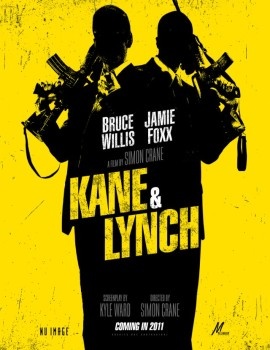 Only two months before production is scheduled to begin, the studio behind the Kane & Lynch movie is casting around for a new director.

Simon Crane, a long-time stunt double and stunt coordinator who's also worked as a second unit director on films including Terminator 3, Troy, X-Men: The Last Stand and Quantum of Solace, was originally signed to direct the Kane & Lynch film but a report by Latinoreview.com claims he has now left the project. A "trusted, proven source" at Millennium Films said "it wasn't working out" between Crane and the studio, but the specifics behind his departure are unknown.

Whatever the reason, the movie is scheduled to begin production in August, so the studio is hustling to find a replacement. F. Gary Gray, the director of and Law Abiding Citizen, turned it down and now Wayne Kramer, whose resume includes The Cooler, Running Scared and Crossing Over, is reportedly in talks to take over.

Does it matter? This looks like a fairly by-the-numbers summer action flick to me, not the sort of thing that requires any particular artistic vision beyond the ability to make stuff blow up real good. The fact that it would have been Crane's first time in the big chair, according to IMDB, speaks volumes: This movie doesn't need someone good, it just needs someone.