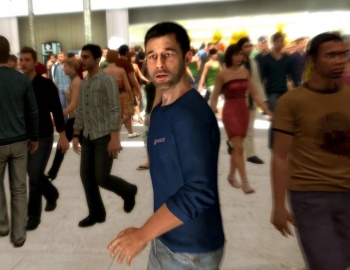 Are Heavy Rain's children the scariest part of the game?

Heavy Rain might have been a heart-gripping tale of human drama to some, but Epic Games' Cliff Bleszinski couldn't get over the freaky faces of its characters. In an interview with GameReactor, Cliffy B jokingly labeled the game's children as "hideous."

Quantic Dream's fusion of movie and videogame was brought up after Bleszinski said that action is in Epic's "DNA" and the developer won't be making the next Heavy Rain anytime soon. On the title, Bleszinski stated: "I don't think they have done enough to avoid the 'uncanny valley' problems."

The "uncanny valley" is a term used to describe a certain phenomenon where virtual characters become more and more appealing to the human brain until they reach a certain point very close to reality. At this point, the appeal sharply drops, creating a situation where realistic characters can actually repulse more than those that are abstract.

"The children in the game are some of the most hideous I have seen," Bleszinski continued. "Ever." Let's face it, he's right, even though Heavy Rain's character depictions are some of the most lifelike we've seen in recent times. Every once in a while, they look a little freaky.

Before you label the comment a bash on Heavy Rain, Bleszinski later tweeted: "This was a JOKE people. Some gaming "press" is becoming *very* tabloid these days. I LOVE Heavy Rain." Just because he loves the game, though, doesn't mean it isn't swimming in a valley of uncanny. Heavy Rain's characters are probably on the forward edge of the uncanny valley, but at times looking at young Jason and Shaun's faces did make me want to uncontrollably throttle them. That's the uncanny valley for you.