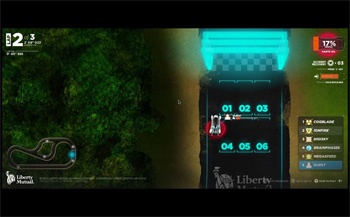 Insurance provider Liberty Mutual has released a free web racer that not only rewards you for finishing first, but finishing safely, too.

Liberty Mutual might want to change its motto. There's nothing wrong with, "Helping people live safer, more secure lives," but the company might want to consider adding in something like, "thanks to the magic of videogames." The insurance provider has launched a free Flash game on its website that teaches players how safe driving is equally as important in a race as speed is.

The game, 2099 is a top-down futuristic racer where players compete against five opponents on a small variety of tracks; upgrades and new vehicles become available as one progresses and achieves certain milestones. If you damage your vehicle, you can use your insurance coverage to repair it and replenish its strength, but your driving record dictates how much coverage you have access to.

There are both single and multiplayer modes available. If you play against others, you can invite friends or family to play with you, or you can join public games against random opponents who happen to be online. Unsurprisingly, there's a Facebook Connect option, where users can challenge each other to races or provide updates about their in-game statistics.

When it comes to promoting safe driving, this isn't the only time in the past few months that games have been used to help with the marketing. Hyundai recently ran a commercial featuring a teen playing Crazy Taxi while a narrator talked about how parents might want to consider getting a safe car for new drivers.

Whether or not this will convince you to sign up for a policy with Liberty Mutual, 2099 is certainly a cute little web game. For any of us who grew up in the early 1980s, this is a send-up to those classic top-down racers that we all played at the arcades. That said, the controls felt a little too-sensitive when it came to movement, but that was probably intentional since it becomes harder to avoid damage that way.

I'm pretty happy with my current insurance provider, but I enjoyed 2099 before I went back to work. However, if a company creates a Crazy Taxi clone for me to play on my web browser, I might just be tempted to sign up with them.