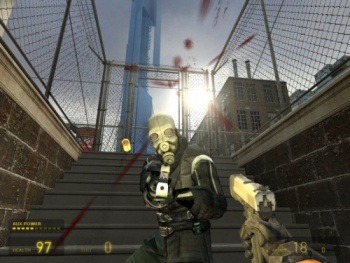 If you'd been hoping that Valve's June 14th "surprise" would be an unexpected reveal of the long-dormant Half-Life 2: Episode 3, time to hope a little bit harder.

Not too long ago, Valve kicked the internet hype machine into a frenzy by announcing that it was unexpectedly canceling its Portal 2 E3 event - and replacing it with a "surprise." Naturally, this stirred the Valve fanboys into a frothing fury of excitement: What else could this surprise be but a glorious announcement of the seemingly-forgotten Episode 3?!

Well, I don't know what it is - but it's not Episode 3. And that "Freeman: June 14th" picture that's been floating around the tubes? It's fake.

Both of these were confirmed via no less a reputable source than Valve head honcho Gabe Newell, reports Halflife2.net. So sorry, people, time to take off your party hats and put the bubbly away - Episode 3 is still unlikely to see the light of day any time soon.

On the bright side, PC gamers will probably have a damn good year when both Episode 3 and Diablo III release in 2014.