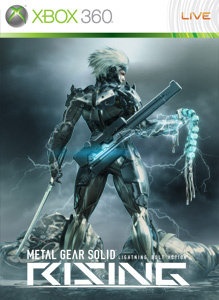 Raiden's duds look to have gotten even more powerful than they were in Metal Gear Solid 4.

A new image of Metal Gear Solid: Rising's packaging lifted from Xbox Live Marketplace gives us a full view of what Raiden will be wearing in the game. From the back, anyway.

While Raiden's cyborg-ninja suit from Metal Gear Solid 4 looked very organic and smooth, his new exoskeleton is metal and bulky. The first rendered image of him from Rising, Konami's in-development next-gen Metal Gear title, showed this would be the case, but now we've got a body shot.

Raiden still carries his trademark sword, but also has a powerful looking rifle strapped to his back. The most interesting reveal in the new image is whatever Raiden is holding in his right hand, which looks like some kind of electric cat-o-nine tails. This could be the "lightning bolt action" referred to in the game's title. EDIT: Either that or, as the community points out, he probably just ripped out something's spine.

Sure, this is just one leaked image, but it's the first hint we've gotten to where Metal Gear Solid: Rising will take the series. Will "lightning bolt action" radically change the series, or will series creator Hideo Kojima tie it in to the stealth-emphasized gameplay the series is known for? He successfully melded regular gunplay into MGS4, so maybe he's got something shocking up his sleeve for Rising too. I just said that, yes. It's a strong bet that something on Metal Gear Solid: Rising will come out of E3 2010 next week.