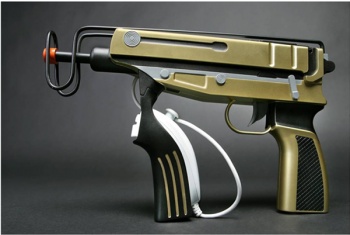 At its E3 2010 press conference, Nintendo confirmed a long-rumored remake of one of the most beloved 64-bit games of all time: GoldenEye 007.

Remember how we reported that Activision would be revealing a remake of the classic N64 game GoldenEye earlier this month? Well, we were half right. It wasn't Activision revealing the game, but Nintendo - but a reveal is a reveal nonetheless.

The new GoldenEye gets both a literal and figurative facelift. On the figurative side of things, the graphics are better than those of the N64 original (as one would hope, anyway...). Taking the expression literally, though, James Bond looks a bit different: Pierce Brosnan has been replaced by current Bond du jour Daniel Craig.

But the same GoldenEye set pieces are still there - the tank chase through St. Petersburg, the famous dam jump at the beginning - so we can hope it's a worthy successor to the original.

Greg Tito has more from the Nintendo E3 conference.