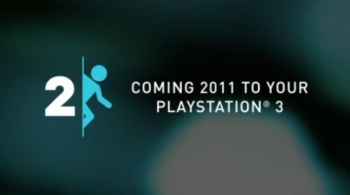 At long last, Valve and Sony have made up: Portal 2 will be on the PS3, and Steam is coming with it.

Valve has had a rocky relationship with Sony this generation, and the lack of the developer's acclaimed games on the PS3 (or even worse, shoddy ports) has long been a thorn in the side of those who own the console.

That's about to change.

Valve big man Gabe Newell took the stage at Sony's E3 2010 press conference, and admitted that he had had some harsh words in the past for the current generation of consoles - that he was glad that Sony representatives (including Kevin "VP of Sharpening Things" Butler) were letting him stand up there.

Portal 2 will be coming to the PS3, said Newell, who promised the attendees that the PS3 version would be the "best on any console." Xbox 360 owners must be unhappy to hear that.

Hey everybody, I think we know what the mysterious "Valve E3 Surprise" is. Also, Steam is coming to the PlayStation Network, with cross-platform chat. How that'll work is anyone's guess.

For more, check out Steve Butts' liveblog of the event.