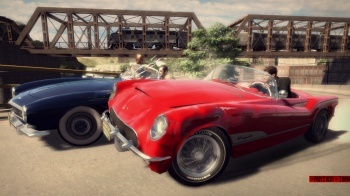 Like many open-world games, Mafia 2 is all about atmosphere. And it nails the ambiance of the early 50s quite well. From playing the game at GDC, I know that you play as Vito, a war veteran who returns to an East Coast American city to find his father dead and his family in debt. He turns to an old friend to pay the bills, which draws him into the underworld of Italian organized crime that we all recognize from films like The Godfather and Goodfellas. I got to playthrough a mission from start to finish in a demo at the 2K Games booth.

A fellow hitman asks Vito and his friend to help him with a contract to kill a portly individual. Starting out in Vito's apartment, I'm pleasantly surprised with the little things. You can turn the faucet on and off. You can pop open the fridge and grab a sandwich or a soda. And the flagship feature, Mafia 2 has a deal with Playboy to have collectible vintage magazine scattered throughout the world. There's one in your apartment and picking it up gives you a glimpse of some starlet from the era. Hope Mom's not watching you play...

Hitting the garage gives you a choice of what car to drive. The vehicles feel real, even if I'm not enough of a vintage car junkie to know if the details are accurate. I pick a car and start exploring the world on my way to the apartment that we've staked out to take down the fat man. Even though the city is not specifically based on a real city, it definitely has elements of New York City, from the Brooklyn Bridge to building that suspiciously looks like the Empire State.

But this isn't GTA's Liberty City. Everything moves at much slower pace, from the pedestrians to the traffic to the cable cars. Even my car never accelerated much faster than snail's pace. It may be true to the 50s lifestyle, but part of me wished that I could step on it to get to the action.

At the stakeout, we get some color from the other hitman. He was born in Sicily and fled to America because of Mussolini, while his father died in jail back in the homeland. It's a harrowing tale, but one throwaway line makes me doubt the veracity. "The accent's coming along really well." Is this guy telling the truth or blowing smoke up Vito's ass? My loyalty was tested, just like a mafia movie.

The mission let me use some combat mechanics and the guns in the game. You start out blasting away from the apartment window with a machine gun, but then you have to abandon it to run into a distillery chasing after your portly quarry. The factory is full of enemies, and you have to use the cover system to survive their tommy gun fire. Hitting "A" hides behind any obstacle or doorway, while the left trigger allows you to pop out to fire. An established chokepoint with two guys blowing away with tommies cannot be charged or you'll get cut down. Your friend tells you to flank em, and that's exactly what you have to do to take em out and pilfer their guns. The demo was difficult the first time through, but once you know where the guys are coming from, it gets a little easier.

The mission ended with the fat man taking a pot shot at the hit man's leg, and you have to rush him to the mafia doctor, "El Greco," in your car. Cops are on your tail though, and soon the three of you are trapped on an overpass with nowhere to run to. I was anticipating a climax of jumping the car off the bridge, but a "To Be Continued" title card was shown instead. Always leave them wanting more, I guess.

Mafia 2 feels like the mob movies that we all love to watch, which I'm sure is intentional. Gameplay seems just like your standard open world shooter, but here the devil is in the details. And the details are awesome, from Playboy playmates to running water to the random racial slurs of the time.

In one section of the mission, you're riding an elevator and your friend takes a swig from one of the liquor bottles that the distillery produces. "Drinking on the job," Vito says. "Since when did you turn Irish?" It's offensive and racist, but it felt straight out of the movies.