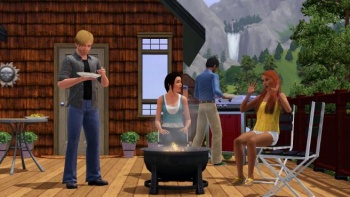 The problem with bringing The Sims, the most popular PC franchise of all time, to consoles, says EA, is that console gamers are different from PC gamers. They prefer their gaming to be fast paced, want a little more direction, and they like to be rewarded for their actions, which is why The Sims 3 is a little different from what you've come to expect from the series.

One intriguing change is the Personality System, which lets you customize your Sim by assigning it a variety of real, recognizable personality traits, such as vegetarian, slob, technophobe, or party animal. With 50 traits to choose from, you can pretty easily make your Sim feel like an actual person. (Warning: Do not attempt to recreate your significant other. It's just asking for trouble.) The personality traits also help define that Sim's Lifetime Wish, which is a long-term gameplay goal. Becoming a Gold Digger might not be the most admirable lifetime goal in the real world, but it's a perfectly valid Wish for your Sim.

While much of the game has been tweaked or simplified, the biggest changes are the Karma Powers and the Challenge System. Karma Powers are almost like superpowers that allow you to change the world around you in drastic and dramatic ways. Use the "Get Lucky" power and it's like you're suddenly covered in four-leaf clovers and rabbit's feet - everything suddenly goes your way. If you're more in the mood for a natural disaster, you can use the Earthquake power to shake things up, or call down a meteor storm to set your neighbor's house ablaze. You unlock Karma Powers by spending Karma Points, which you earn by fulfilling Sims' wishes.

The Sims 3 also has a "Challenge System", which works much like Xbox 360 Achievements or PS3 Trophies. Complete challenge like "get a first kiss" or "get five positive moodlets on a Sim" and you'll earn Challenge Points that you can us to buy new outfits, new items for your house like roof textures, or even Karma Points and Powers.

What I saw looked very Sims Lite, which seemed to be exactly what the developers were going for. The one disappointment was the sparse online play, which is limited to The Exchange. Just about everything in The Sims 3 is customizable, from clothing to furniture, to the Sims themselves, and you can share your creations with the Sims community by uploading them to The Exchange. While it's marvelous that you can upload and download items right from within the game - though I'm a little creeped about by the idea of downloading a Sims family - it's a shame that you can't go visit your friend's Sim house.