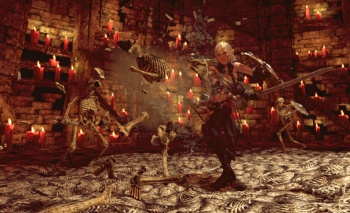 The Bethesda booth was showing a lot of games, but I think that playing Hunted with a teammate was the best way to demonstrate the engine. Many people have called this co-op action game a fantasy Gears of War, and that comparison is not far off. Even Darren Chukitus, the demonstrator taking me through the game, said that there was a "Gears aspect" when you're playing the ranged character due to the cover system.

First off, the environment of Hunted looks and feels amazing. The depth of the draw distance coupled with amazing visual design makes for a visually stunning game experience. That, and the character model for E'lara, the elf archer, was just as hot as it was when the game was announced at GDC.

Playing E'lara is all about ranged sniping. I could switch to sword and shield with the left bumper, but that wasn't her focus. Aiming with the bow was a bit tough until Chukitus told me that I could zoom in by pressing down on the left stick. Early on in the game, my arrow attacks weren't that powerful but if I injured a skeleton, I could tap B to perform an "execution." I got to watch my arrow shot zoom into the skeleton's neck, shattering it into dust. E'lara must collect arrows, as the game keeps track of ammo, but the plus side is that you have special attacks like ice arrows. These attacks use mana, which you can replenish by smashing blue flowers. I trust that these details are explained in the story but for now, it's fun to shoot the environment and watch it blow up.

We got to a checkpoint at a special glowing stone, called a swap crystal, where you can switch between playing different characters. I took over Caddoc, the melee fighter. Using the left trigger raised my shield while I could switch to a dash attack or a levitate spell. The levitate ability creates some perfect synergy with the ranged skills of E'lara; she can easily shoot enemies when they are hovering a few feet off the ground.

A little bit farther in the level, we came upon a dead body on which we could use the Death Stone. This stone allows communication with dead spirits who provide story or clues on where to find treasure. This one told of an axe that slew hundreds of enemies before its owner fell. Following its directions, we made our way over to where the spirit told us to go, and Caddoc did indeed find an axe. Wielding it felt incredibly more powerful than the sword I was using, and Chukitus said that there were a lot of hidden swords and axes available to find in the game.

Caddoc and E'lara have to work together to defeat bosses and choke points, such as taking out a skeleton controlling a ballista - then using that same ballista to destroy two undead-producing columns. For the co-op stuff, it definitely helped playing with someone who could tell me where and what to shoot. I'm interested to see how it develops over the next few months, but Hunted could end up being a really fun game to play through with a buddy.

Of course, you'll be fighting over who gets to play the scantily-clad E'lara.

Hunted is due out on the Xbox 360, PS3 and Windows in Q1 2011, and is developed by inXile Entertainment and published by Bethesda.