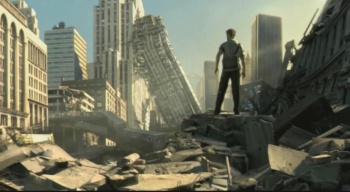 I Am Alive, and I am also at the Ubisoft booth.

It's E3 week, and The Escapist is bringing you all of the juicy stories hot from the show floor! On the plate today: Zelda: Skyward Sword, MGS: Rising, Halo: Reach and the Battlestar MMOG.

This year, Team Escapist is out on the E3 floor in force. The show floor is open and the conferences are over, so here's some of the stuff that you can look forward to today:

From the Show Floor: The major press conferences are out of the way, so from now on it's all new hotness, all the time. Today we have a number of booth tours lined up, and that means we'll probably be getting to see some awesome new games!

Nintendo: We'll be stopping by the Nintendo booth today, and you know what that means: Zelda: Skyward Sword, and some more time with Nintendo's incredible-looking new 3DS handheld. Metroid: Other M and Pokemon Black are there too, but come on guys - new Zelda and the 3DS!

Konami: Let's get our chop-chop-chop on with Metal Gear Solid: Rising, and go hunt Dracula with the new Castlevania.

Ubisoft: HAWX 2 and Scott Pilgrim vs. The World will both be at the Ubisoft booth, and so will long-awaited survival adventure I Am Alive.

Sony Online: Want to see how DC Universe Online is shaping up? Good, so do we.

Lego Universe & Battlestar Galactica MMOG: There are plenty of interesting new MMOGs that aren't from SOE, and we're taking a look at two of them - the Lego MMOG well under development, and the new Battlestar game. Watch out for evil Cylons!

Microsoft: We all know what to expect here. Fable III, Gears 3, and Halo: Reach.

In case you missed it...: Yesterday's top stories - Bulletstorm kicks ass, XCOM should have been called something different, Civ V is awesome, and Sonic Colors is surprisingly decent.